Stephanie Hill charts her own course.

As a freshman at Springfield High School, she convinced the school to let her be the school’s first twirler in 15 years.

Not only did she twirl all four years she was there, she was a feature twirler for the Rocket Marching Band her freshman and sophomore years.

And following her May graduation, the Construction Engineering Technology student will join a select group of women who are entering a historically male-dominated construction career field.

Women make up about 10% of the construction industry’s workforce, according to an estimate from the National Association of Women in Construction.

“As an incoming freshman I had a lot of doubts,” Hill said. “I had very little prior knowledge about construction before starting school. Not only was I worried about how I was going to do in my major but also in college in general.

“But I always loved to build things,” she said, “and after I learned about the different majors offered at UToledo during my tour of the engineering college, I was able to decide that construction engineering was right for me. I applied to a lot of other colleges just to see what else was out there, but The University of Toledo just felt right.”

Hill’s first co-op was spent building an apartment complex in Michigan, where she was able to learn about the construction process firsthand. Her second and third co-ops were in Seattle, where she worked on a heavy civil project with Kiewit Construction.

That was where she “fell in love with bridges,” she said.

“I even secured a full-time position as a field engineer nine months before I graduated, with the company, Kiewit Construction, that I set my sights on during my freshman year,” she said. “Nothing is better than having a full-time job lined up before you start your last semester, especially with an amazing company.” 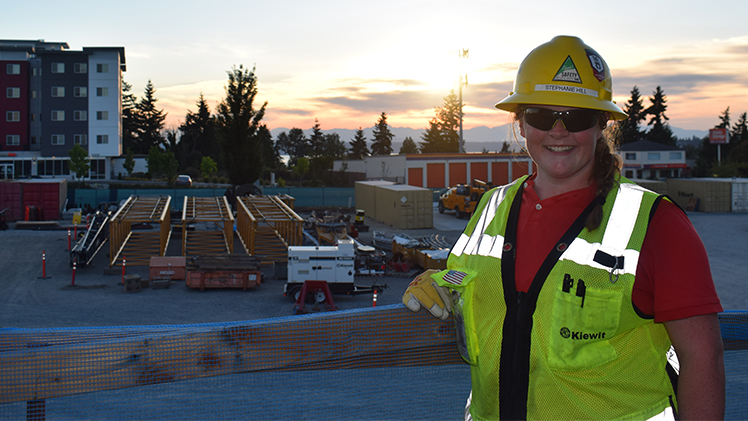 As part of her co-ops, Stephanie Hill worked on a heavy civil project with Kiewit Construction. She accepted a full-time position with the company nine months before her May graduation.

Before she receives her diploma, Hill has embarked on a successful career path.

“I find myself, after five years at UToledo, very confident with the ability to contribute positive ideas and knowledge to topics related to my major,” she said.

Rhonda Moore, associate co-op director in the Shah Center for Engineering Career Development, said, “Stephanie’s co-op evaluations always came back with comments about her great attitude and professional behavior in the field, and her early full-time job offer reflects this. The opportunities for women in Construction Engineering Technology are endless, and I know Stephanie will be a great role model for our future Rocket engineering alumna.”

And just as other women in engineering helped push her forward, Hill said she wants to help bring along others as well.

“As a woman in construction, it can be intimidating putting yourself on the line, but in my experience, that is how I learn best. Learning is meant for failure and without failure, success would mean less.”