The University of Toledo’s Epsilon Delta chapter of Pi Sigma Epsilon (PSE) was named the organization’s 2021-2022 Lewis F. Gordon Top Gold Chapter in the nation, an award given to the top overall chapter in the United States.

The honor was bestowed at the PSE National Convention and represents the chapter’s dedication and commitment to its members. 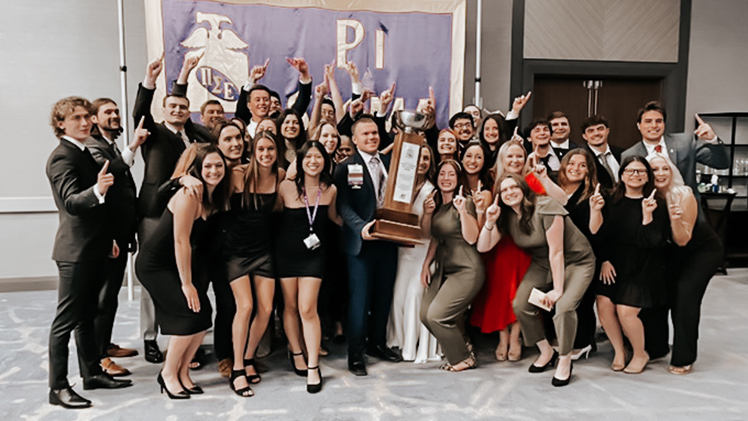 UToledo’s Epsilon Delta chapter of Pi Sigma Epsilon was named the organization’s 2021-2022 Lewis F. Gordon Top Gold Chapter in the nation, an award given to the top overall chapter in the United States.

Former Epsilon Delta Chapter President Jakob Stober expressed the importance of the chapter’s success: “Being in PSE is not about the awards or the competitions. It’s about a group of students united behind a common mission statement of being better together. Epsilon Delta has truly fostered a culture based on positivity and inspiration, centered on our mission statement.”

These awards reflect the chapter’s success, as well as its members’ commitment to being the best business professionals they can be in every aspect of their lives.

Senior Jordan Fannin placed first in the nation in the Pro-Am Sell-a-Thon. She also repeated as champion of the Interview Competition, winning it for the second consecutive year.

Stober received the Whan Challenger Award, which is presented to the top PSE member of the year.

The Presidential Merit Award for Alumni Engagement was awarded to senior Laura Stapleton in recognition of her exemplary engagement with the Epsilon Delta chapter alumni.