A memorial service honoring Don Reiber will be held in The University of Toledo’s Savage Arena Sunday, April 24, at 2 p.m.

Reiber, associate professor of communication and the director of the Department of Communication’s Media Services, passed away Sept. 20 at age 68. 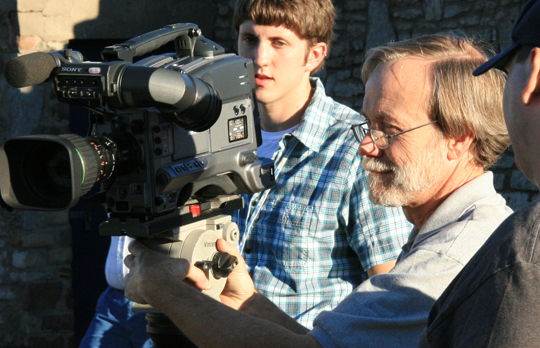 He spent 36 years at the University teaching television production, live-truck production, and radio production and programming. His students and alumni number in the thousands, working in broadcasting in Toledo, across the United States, and for national news organizations, including CNN.

“Everything you’ve heard about Don Reiber is true,” Paul Helgren, UT associate athletic director, said. “What made him a great employee was his work ethic, professionalism and dedication to UT — especially UT students. What made him a great person was his easy-going nature and his genuine interest in others.

“He touched so many lives, probably many more than he ever realized,” Helgren said. “Don helped make this University great. His influence will be felt here for many years to come.”

Dan Saevig, UT associate vice president of alumni relations and longtime friend, will emcee the program, which was planned according to the wishes of Reiber’s wife, Pat, and son, Christopher.

“We have alumni from as far away as California coming for the service,” Saevig said. “We expect several hundred to be there to celebrate a great human being who did so much for students and this University.” 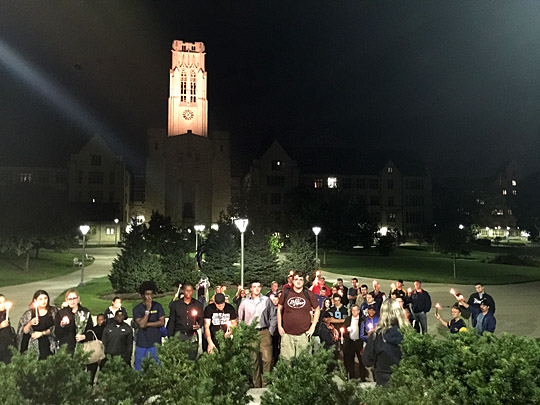 Students gathered Sept. 20 on Centennial Mall for a candlelight vigil to remember Don Reiber, associate professor of communication, who passed away suddenly that morning.

Several speakers will share remembrances. These will include Dr. Clint Longenecker, UT Stranahan Distinguished University Professor and director of the Center for Leadership and Organization Excellence; Dr. Nagi Naganathan, dean of the College of Engineering; Mike O’Brien, vice president and athletic director; and Tricia Cullop, head coach of the women’s basketball team.

And there will be a video tribute put together by Dr. Jackie Layng, professor of communication; John Eidemiller, executive producer and media services coordinator in the Communication Department; and Jonathan Mondelli, UT instructor of communication.

“I just felt that if you are going to honor a broadcasting professor, then doing a broadcasting video seems the right thing to do, especially because he lived and breathed broadcasting every day of his life,” Layng said.

“What I hope to do with the video is show the many sides of Don and the impact he had on me, the students, the staff and the University. We all had a very special relationship with this incredibly kind man who made everyone he met feel special,” she said.

Eidemiller is one of those students that Reiber took under his production wing.

“For me, Don was more than a teacher, or a boss, or even a mentor. He was like a second father,” Eidemiller said. “From fall 1997 when I switched my major from engineering to communication at the start of my sophomore year, through spring 2000 when I graduated, I spent more time with Don than with anyone else. He probably taught me more about every facet of production during those three years than I’ve learned in the 16 years since.”

“I know I can’t do him justice in a five-minute video, but I am going to try and honor my friend in a way I know he would appreciate the production value,” Layng said. “He was a very humble person and would not have liked all the fuss we are making over him now, but he would appreciate a good production with a good story, so I’m going to try and tell some of his story.”

Part of that story is Reiber’s far-reaching influence.

“When I came back to Toledo after two years in Washington, D.C., it was because there was a position open here, and I absolutely could not pass up the opportunity to work with Don,” Eidemiller said. “While I can say that I am slowly getting used to his absence, there isn’t a day that goes by that I don’t miss him. And I will be forever grateful for everything he did for me over the almost 20 years that I knew him.”

“Don was and still is a true inspiration to all that had the pleasure to have worked with him. He made us all want to be better at what we do,” said Tyler Mattson, a student who will receive a bachelor’s degree in communication in May and who received a bachelor’s degree in pharmaceutics in 2014. “I knew Don for seven years from helping at events across campus. We all know that everything he did at UT wasn’t because he had to, but because he wanted to. It was with this that he showed and inspired all of his students and those who had come to know him.

“Don will always have a place not only at UT, but in our hearts as well,” Mattson said.

The tribute video will roll at the end of the service.

“Without any solicitation, that fund has raised more than $20,000,” Saevig said. “Don always wanted the students to come first. He was one who didn’t want recognition, but I think one thing that would make him happy is that his friends and colleagues stepped up for something that will directly benefit the students.”

The fund in Reiber’s memory was established with the intention of dedicating the production control room in Savage Arena in his honor, pending approval by the UT Board of Trustees and the completion of a fundraising campaign.

Contributions may be made to the Don Reiber Student Production Fund to The University of Toledo Foundation. Go to https://give2ut.utoledo.edu.