For the first time in almost six years, Grant Godfrey is feeling like himself again.

After spending nearly his entire career with The University of Toledo men’s golf program overcoming a life-threatening auto accident suffered when he was 16, the Rocket senior is finally fully healthy and eager to show what he can do on the golf course.

“I have never felt better physically,” Godfrey said. “I have zero back problems now. I have gained almost 20 pounds in the last year and a half. I’ve also gotten a lot stronger which has helped a lot thanks to [Strength and Conditioning] Coach [Steve] Murray.”

That’s saying something considering Godfrey shattered his ulna bone in his forearm and doctors needed to put five screws and a plate in his right elbow after that car accident Dec. 28, 2014. He was told at the time there was only a slim chance he would play golf again.

However, the Delaware, Ohio, native beat those odds and returned to the links 10 months later. Pain lingered in his back, though, and doctors discovered ankylosing spondylitis, a condition that made his spine less flexible and led him to take a redshirt season following his freshman year.

“Grant wasn’t able to get out of bed after playing golf at that point,” Head Coach Jeff Roope said. “It was something that was very frustrating because he possesses the talent to be a great golfer.”

After lots of hard work over the last two years to get healthy, Godfrey, along with his Rocket teammates, were starting to hit their stride this spring. But Toledo’s season and Godfrey’s college career came to a halt March 12 when the season was canceled due to the coronavirus pandemic. Just two days earlier, the Rockets had turned in their best performance of the season at Auburn’s Tiger Invitational. 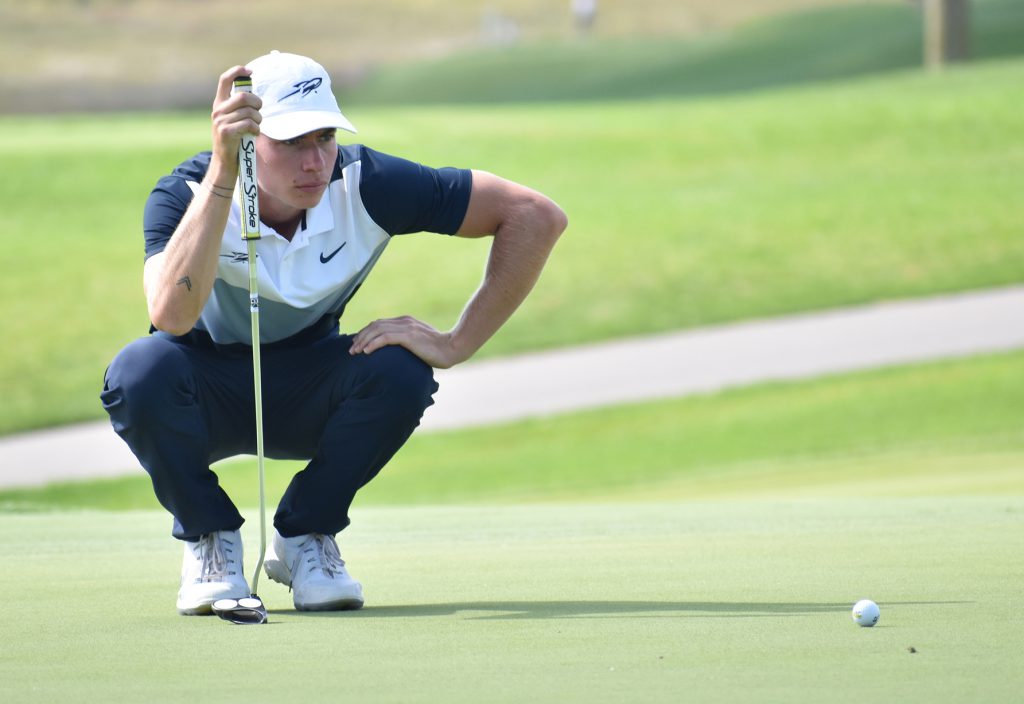 Grant Godfrey, who overcame a life-threatening auto accident, will receive his bachelor’s degree in marketing and plans to pursue a professional golf career.

“Our goal was to compete for the MAC Championship,” Godfrey said. “The starting five had just started to click as a group, and we were moving in the right direction. When it happened, it didn’t seem real. I’m still in a little bit of shock. Everything just ended so abruptly. There were a lot of unanswered questions for every sports team. The whole ‘What if?’ question still drives me crazy.”

With his college career over, Godfrey made the decision to play professional golf. He played in two tournaments in Florida before seeing that opportunity postponed as well.

Being part of a team is something that Godfrey said he will miss as he continues his golfing career. He said that fellow senior Rasmus Broholt Lind in particular provided him even more motivation.

“Rasmus had a big impact on me,” Godfrey said. “He helped push me on and off the course every single day. He helped make me a better man, and I can’t thank him enough.”

Unfortunately, walking across the stage at the Glass Bowl along with Lind is another memory Godfrey and his family will miss out on. Godfrey will receive his bachelor’s degree in marketing from the College of Business and Innovation.

“Earning a degree is a big thing for me and my family,” Godfrey said. “My dad was the first Godfrey to get a college degree, and I will now be the second. It’s a bummer for my family not being able to see me on stage receiving my diploma.”

Still, Godfrey is thankful for his time at UToledo and will take skills with him on his golfing journey that will last a lifetime.

“I have grown tremendously the past four years in all areas,” Godfrey said. “I’ve become a more well-rounded player and person. I have also learned how to be a leader and how to push people to be their best. I have become more resilient as a person. I had many ups and downs like many other athletes, but as bad as it got, I never gave up.”