The annual spring walleye run is extending to a location not reached in more than a century in a tributary of Lake Erie.

Taylor Sasak has spent the last two springs searching for signs that walleye are moving past the site of the former Ballville Dam that was removed in 2018 on the Sandusky River near Fremont, Ohio. 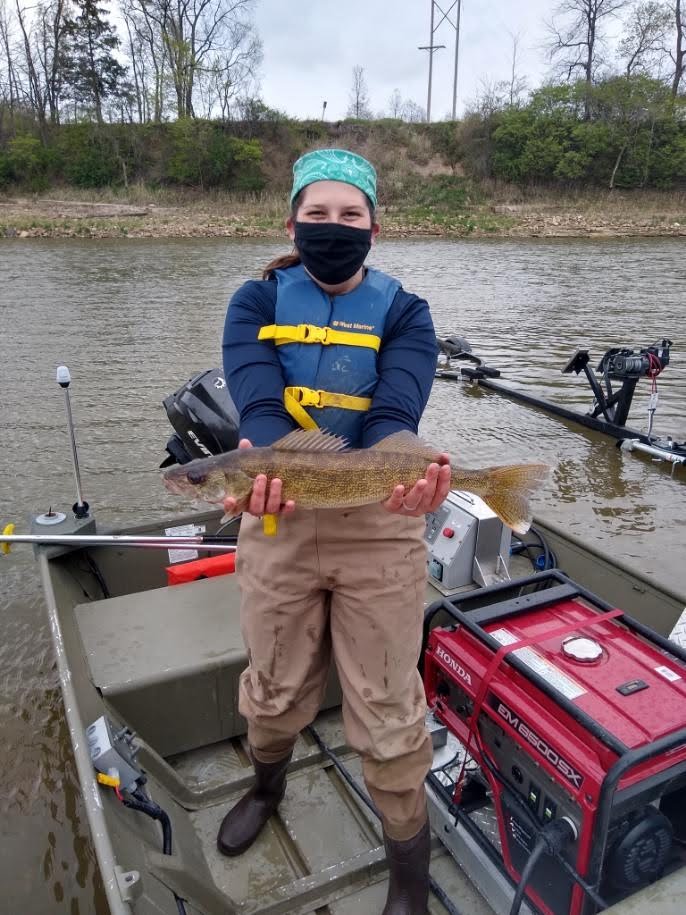 UToledo graduate student Taylor Sasak holds a walleye captured last week on the Sandusky River. The photo was taken by Brian Schmidt, a fisheries biologist at the Ohio Department of Natural Resources Division of Wildlife.

The graduate student at The University of Toledo made the discovery last week while electrofishing in a boat as part of her ongoing research project.

Sasak caught 13 walleye near Portage Trail Park and one walleye near Wolf Creek Park above the former obstacle, the first time walleye have accessed the habitat that had been blocked for more than 100 years.

“The Ballville Dam blocked migratory fish, such as walleye, from accessing upstream areas of suitable spawning habitat for over a century,” Sasak said. “By finding walleye upstream, we now know that they have access to more spawning habitat, which will hopefully increase the Sandusky River stock of walleye over time. This is great news for anglers as they will have more opportunities to catch walleye along the Sandusky River.”

The ongoing fieldwork is a collaboration between UToledo and the Ohio Department of Natural Resources Division of Wildlife (ODNR-Wildlife).

“This is the first documentation of walleye moving past the dam site since its removal in 2018,” said Eric Weimer, fishery biologist supervisor with the Sandusky Fisheries Research Station with ODNR-Wildlife. “Taylor has been working on post-removal assessment of habitat and the fish community as part of a Division-funded graduate project and has been trying to document passage for two springs, so we are understandably excited.”

Sasak and Madison Myers, master’s students in the UToledo Department of Environmental Sciences, have been working on the research project together. They work in the laboratory of Dr. Jonathan Bossenbroek, UToledo professor and chair of environmental sciences.

“Taylor led the field components while Madison led the mapping, or modeling, of the areas of the Sandusky River within the former dam site showing other potential impediments to fish movement,” Bossenbroek said. “We don’t know if walleye were historically above the dam site. There is a natural shelf in the river at that location that could also impede spring migration.”

Sasak is assessing the abundance of walleye coming into the river to spawn.