“I’m very excited to be going to Buffalo,” Gilliam said. “I thought they might draft me but it didn’t work out that way. I’m going there either way so I’m happy.” 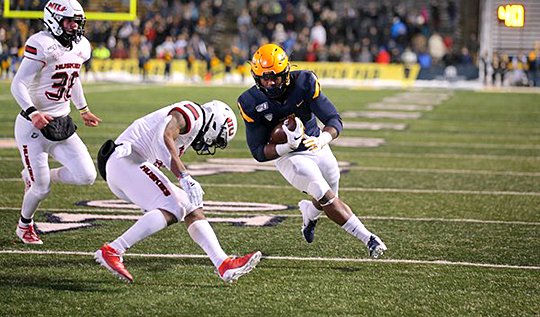 Reggie Gilliam made second-team All-Mid-American Conference at tight end in 2018, but he will be used as a fullback by Buffalo.

Though he was listed at tight end in college, Gilliam will play fullback for the Bills. Gilliam did a fair bit of blocking in the backfield in his college career, so he said he is ready for the challenge.

“I actually played a lot of fullback in college, so it’s not a big change for me,” he said. “Buffalo said they really liked how I played the position. They have a veteran player at fullback [Patrick DeMarco], but they said I will have a chance to earn the job.”

Gilliam was a two-year starter at tight end at Toledo, earning second-team All-Mid-American Conference honors in 2018. He caught three touchdown passes that season and led the country and set the school record with four blocked kicks.

A two-time Academic All-MAC selection, Gilliam was a nominee for three national awards in 2019: the Campbell Award (top scholar-athlete), the Jason Witten Collegiate Man of the Year Award (leadership) and the Burlsworth Trophy (top player who began career as a walk-on). He graduated with a degree in interdisciplinary studies and is working on a master of liberal studies degree.