But it wasn’t long ago that Hogue was hired as a beat reporter at his hometown newspaper, the Dayton Daily News.

Having graduated with a bachelor’s degree in mass communications from Wright State University in December 2015, Hogue was certain this ground-level position was the beginning of his future career in journalism.

The summer of 2016 would change that. Before joining the newspaper, Hogue interned with Disney in Orlando in the hopes of joining ESPN. As with many Americans, he found himself struggling to make sense of the deaths of Alton Sterling and Philando Castile, two Black men who were killed by police.

“I was just so upset that I didn’t know how to react or how to think,” Hogue said. “I just thought, what is it that I can do to make the world a better place, more specifically, how can I make an imprint on how these situations turn out?”

He thought the answer might be law school. And while Hogue gave journalism a go, the inward clarion call to become a legal advocate proved too much for him to ignore.

He quit the newspaper and instead worked a pair of part-time jobs that afforded him more time to study for the LSAT.

“I don’t have anyone in my immediate family who is an attorney, and I am a first-generation as both a college student and as a law student, so this was all new to me,” Hogue said.

His efforts were rewarded only an hour or two after he submitted his third and final LSAT score to The University of Toledo College of Law.

“It was the wildest three-hour period of my life outside of exams,” Hogue said. “I was at work and, because I was incredibly nervous, went outside to open the email. I was at a loss for words when I saw that I had been accepted and I was shaking, but I didn’t know if that’s because I was outside in the cold without a jacket or because I was so excited.”

And then he saw a handwritten note in the admission materials with more great news: He was the recipient of a full-tuition scholarship.

“And that’s when I just started bawling my eyes out, like, ‘What just happened?’ ”

He said he’s certain his dad cried, too, when he called to share the news. 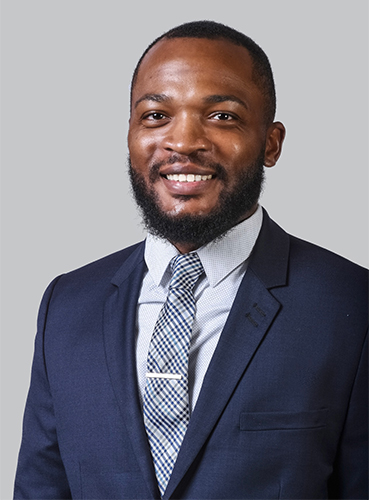 During Hogue’s time as a UToledo law student — including his tenure as president of the Black Law Students Association — he has worked to make an impact for his fellow law students now and in the future.

He launched the Under Color of Law Podcast last year to discuss the intersectionalities of race, gender, socioeconomic status, law school, and the legal field in general.

“My hope is that I can educate future law students on what to expect from law school outside of their casebooks,” Hogue said. “Those who want to learn more can get a glimpse of how unrelenting these environments can be when you’re not a straight white male. Those for whom these environments were created to exclude, they can feel some sense of community and understanding that they’re not alone but that they also belong there.”

“I’ve had the pleasure to teach Tre Hogue in two courses and to supervise a paper he wrote,” Cavalieri said. “I have cold-called Tre on the hardest cases in Trusts and Estates and I have listened with awe at the insightful comments he has contributed during discussions of challenging topics in Public Health Law. He is an authoritative presence at the law school who is widely respected and beloved among his classmates as a person whose quiet demeanor masks his gravitas, his generosity of spirit and his hilarious sense of humor.”

Hogue said the law professor has been his mentor at the University. Cavalieri returned the compliment about her student.

“In many conversations we have had one-on-one, Tre’s nuanced and thoughtful analysis of issues of racial injustice has deepened my own grasp of how racism affects my students,” she said. “I am so very sad to see him leave the College of Law, but I cannot wait to see what his career holds at Shumaker, Loop and Kendrick.”