Sornlaksup, who was also named First-Team All-MAC, was one of four Rockets to earn postseason distinctions from the MAC. Sophomore Adam Kovac and junior Krzysztof Wetoszka were named Second-Team All-MAC, while senior Cole Shoults was named the league’s Jack Verdevelt Sportsmanship Award honoree. 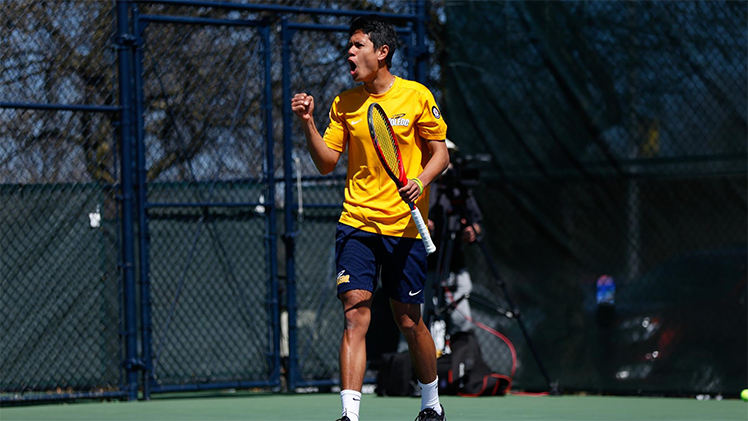 Pawit Sornlaksup is the first Rocket to be named Player of the Year since Stjpan Sisko, who received the honor in 2015 and 2016.

“To have four guys honored says a lot about our year and how they led this team,” Head Coach Al Wermer said.

Sornlaksup is the first Rocket to earn First Team All-MAC honors since Luka Vitosevic in 2019, and also the first Rocket to be named Player of the Year since Stjpan Sisko, who received the honor in 2015 and 2016. The Rayong, Thailand native registered a 22-2 singles record with an unblemished 10-0 mark against conference opponents this season, ending the year on a 22-match win streak from the No. 1 court. He also notched a doubles record of 16-2 (8-0 MAC) from the top court with junior Marko Galic. Sornlaksup collected six weekly MAC Player of the Week honors, four for singles play and two for doubles performances.

“I knew Pawit could be a high-impact player, but what he’s done is astounding,” Wermer said. “His tennis IQ is elite, but in the past eight months his persistent advancements in physicality, game style and his mental toughness have been exemplary. Despite an ever-growing target on his back, Pawit remained laser-focused on the moment at hand.”

Wetoszka tallied a singles record of 14-9 (7-3 MAC) from the No. 3 court and went on a five-match win streak from March 19-April 8. The Szczecin, Poland native compiled a doubles record of 9-9 (4-3 MAC) mostly with Cole Shoults from the No. 2 spot. Wetoszka was also named Second Team All-MAC in 2021.

“Krzysztof and Adam never blinked the entire year,” Wermer said. “These guys don’t need many rah-rah speeches. They just love to play the game, and every day they come out to get better and help their team. This makes them authentic and impactful leaders.”

Shoults ended his season with a singles record of 5-10 (3-4 MAC) from the No. 4 court, and a 7-7 doubles record (4-3) mostly with Wetoszka. The Carmel, Ind. native is the second straight Rocket to earn the Jack Verdevelt Sportsmanship Award, following Thawin Suksathaporn in 2021.

“Cole is one of the most selfless and humble people I’ve ever known,” Wermer said. “When you add that his preparation and work habits are impeccable, then you have the ingredients of a tremendous and genuine leader. He walks softly but carries a big stick. But when he does talk, you’ll want to listen. He definitely evolved into our point-man who put the team needs ahead of his own.”