Brie Globig has been named the head coach of The University of Toledo swimming and diving program.

Globig spent the 2019-20 season as the team’s interim head coach. 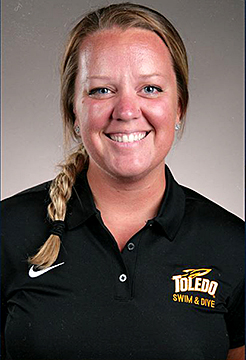 “I am grateful and excited for the opportunity to continue to lead the women’s swimming and diving teams at The University of Toledo,” Globig said. “The program has a rich history of success, and I am eager to continue its trajectory of excellence.”

After dropping the interim tag from her title, Globig becomes the seventh head coach in program history. She joined the program as an assistant in July 2019, then was named interim head coach in September and led the Rockets for the 2019-20 season.

“I am also thankful to be working in a supportive athletic department with [Vice President and Director of Athletics] Mike O’Brien and [Senior Associate Athletic Director] Kelly Andrews,” Globig said. “Their continued support and guidance fosters an environment for success. Since stepping on campus, I knew The University of Toledo was an exceptional place to work and coach. I am eager for the future.”

“During this past season as the interim head coach, Brie demonstrated the type of leadership we are looking for in our women’s swimming and diving program,” O’Brien said. “We are excited that Brie will continue as a Rocket and look forward to the future development of our swimming and diving student-athletes.”

Globig came to Toledo last summer after a four-year stint as the head coach at East Stroudsburg University.

She graduated from Bloomsburg University in 2012 with a degree in pre-physical therapy and health science. In 2014, Globig earned her master’s degree in sport management with a concentration in intercollegiate athletic administration from California University of Pennsylvania.