Advancing our country’s global leadership in solar energy technologies, The University of Toledo is a founding member of a new organization called the U.S. Manufacturing of Advanced Perovskites Consortium, which is focused on moving a breakthrough new technology out of the lab and into the marketplace to enhance economic and national security.

The group is working together to accelerate U.S. commercialization of perovskite solar cell technology in partnership with leading domestic companies, including First Solar, one of the world’s largest manufacturers of solar cells and a company that originated in UToledo laboratories. 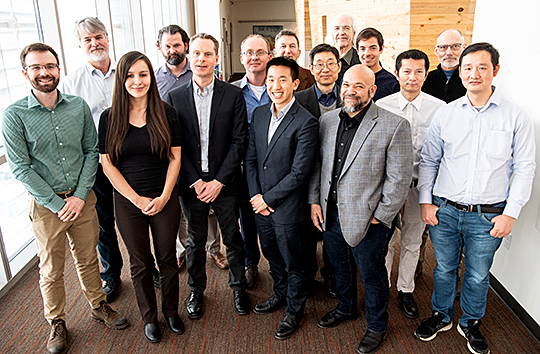 Known as US-MAP, the consortium’s founding members are UToledo’s Wright Center for Photovoltaics Innovation and Commercialization; the U.S. Department of Energy’s (DOE) National Renewable Energy Laboratory (NREL) in Golden, Colo.; Washington Clean Energy Testbeds at the University of Washington; and the University of North Carolina at Chapel Hill.

“Perovskites have the potential to become a game-changer for solar and many other fields,” Martin Keller, NREL director, said. “By combining our research efforts, this new consortium will bring this technology to market sooner than if we were all operating alone.”

Dr. Yanfa Yan, UToledo professor of physics, has had great success in the lab drawing record levels of power from sunlight by using two perovskites in a so-called tandem architecture on very thin, flexible supporting material.
Yan’s efforts have increased the efficiency of the new solar cell to about 23%. In comparison, silicon solar panels on the market today have around an 18% efficiency rating.

Dr. Michael Heben, UToledo professor of physics and McMaster endowed chair, also is a leading researcher in this field working on studying the reliability of perovskite solar cells.

“We have a talented team of physicists on faculty making significant advancements using perovskites to make solar energy more affordable, working closely with students and our industry partners,” Heben said. “UToledo is already well-known internationally for its work on cadmium telluride solar cells, which are already being manufactured at large scale by First Solar. We are proud to share our resources and expertise to support U.S. companies in the face of international competition and help the country have control over our energy infrastructure.”

“I applaud The University of Toledo and the National Renewable Energy Lab for their new and exciting partnership advancing U.S. leadership in solar energy technology,” Congresswoman Marcy Kaptur said. “The U.S. Manufacturing of Advanced Perovskites Consortium will move our country and region forward in solar energy development at a time when it is needed more than ever. As the chair of the House Appropriations Subcommittee on Energy and Water Development, I will continue to prioritize Department of Energy programs that help fund these important programs through competitively awarded grant opportunities. I thank The University of Toledo, the National Renewable Energy Lab, and other partnering organizations, including First Solar, for their commitment to solar energy.”

In addition to harnessing sunlight to generate electricity, perovskites have shown promise in a range of other applications, including solid-state lighting, advanced radiation detection, dynamic sensing and actuation, photo-catalysis and quantum information science.

Early research investments by DOE’s Solar Energy Technologies Office, its Office of Science, the Department of Defense and by the domestic industry partners have enabled the United States to engage at the forefront of many of these technology areas and has fostered a vibrant community of industrial leaders.

US-MAP founding members will form the executive board that will oversee successful completion of projects. The executive board and the member institutions will be informed and guided by an industrial advisory board composed of new U.S. startups and established companies in the perovskite area. The founding members of the board are six U.S. industry players: BlueDot Photonics, Energy Materials Corp., First Solar, Hunt Perovskites Technologies, Swift Solar and Tandem PV.

US-MAP capability providers will share research and development, validation, and pilot manufacturing capability and experience, which should reduce development costs and times to minimize technology risks for potential investors. The main focus areas of the consortium include durability, development of advanced analytical tools, scalable manufacturing tools, in-line metrology and more with each partner providing capabilities according to their areas of strength. The commercial members will have access to the array of research facilities at the four founding members or other capability-providing institutions.

The organizers and members of US-MAP have already begun expanding this network to include the University of Colorado at Boulder and the SLAC National Accelerator Laboratory.

The founding organizers of the US-MAP consortium will explore funding from a variety of sources, including industrial members and the federal government.

Leadership of the consortium will be provided at NREL by Dr. Joseph J. Berry, senior scientist and perovskite team lead, and Dr. Jao van de Lagemaat, director of the Chemistry and Nanoscience Center, who will work with the key points of contact of the other founding member institutions and industrial advisory board.

“Forming this collective will enable innovation in the U.S. that will strengthen our position in these important materials and associated technologies,” Berry said.

For more information about US-MAP, visit the NREL website.

NREL is the U.S. Department of Energy’s primary national laboratory for renewable energy and energy efficiency research and development. NREL is operated for the Energy Department by the Alliance for Sustainable Energy LLC.