As a pharmacy student, Jared Malott’s work in The University of Toledo CommunityCare Clinics led him to a career that combines his passion for community service with his professional aspirations.

“I started out as one of those students coming in to earn clinical elective shadowing hours,” Malott said. “Then I decided I wanted to take on a bigger role in the clinic. It changed my life.”

Malott has been on numerous domestic mission trips, participated in Habitat for Humanity builds, organized several charitable events to support underserved communities and recently returned from a week-long mission trip in Honduras. Still, the work at the CommunityCare Clinics struck a different chord.

Malott will join The Ohio State University College of Pharmacy and the Charitable Pharmacy of Central Ohio in Columbus as a pharmacy resident after graduating in May with a doctor of pharmacy degree. The pharmacy in Franklin County provides pharmacy services at no charge to patients.

“I’ve always had a passion for service,” Malott said. “It’s something I knew I wanted to be a part of. I’m really looking forward to taking this next step and launching my career. I know I wouldn’t be in this position without my professors, family and friends at UToledo.”

Malott’s experiences at the clinic, including serving as co-director of pharmacy relations in the middle of the pandemic, inspired him to complete a clinical rotation at a charitable pharmacy in his hometown of Cincinnati. That led him to want to work in a similar setting after graduation.

“It all just kind of blossoms and connects,” Malott said. “It’s been such an inspiring experience of one thing leading to another. My interest in following this career path wouldn’t have been sparked without my position in the CommunityCare Clinics or my involvement in different service activities at The University of Toledo.” 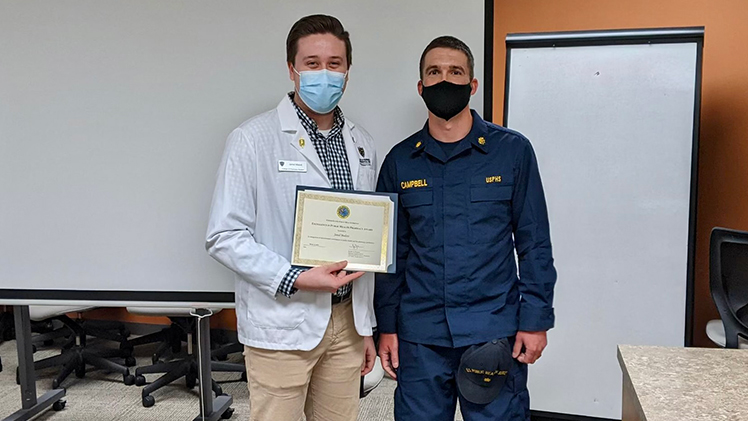 Jared Malott, who graduates in May with a doctor of pharmacy degree, was among 90 pharmacy students honored with the 2022 Excellence in Public Health Pharmacy Award through the U.S. Public Health Service in recognition of their commitment to public service.

Malott was recognized nationally for his commitment to public service as a recipient of the 2022 Excellence in Public Health Pharmacy Award through the United States Public Health Service. He was among 90 pharmacy students across the country to receive the honor.

“When the application became available, I knew immediately that Jared was the obvious choice for the nomination,” said Dr. Megan Kaun, director of experiential education in UToledo’s College of Pharmacy and Pharmaceutical Sciences. “His work with the student-run UT CommunityCare Clinics and with The University of Toledo Catholic Student Association demonstrates his core beliefs of altruism and service to his community. He embodies the mission of The University of Toledo in his pursuit of improving the human condition.”

Dr. Julie A. Murphy, associate professor and associate dean for accreditation compliance in the College of Pharmacy and Pharmaceutical Sciences, witnessed Malott’s eagerness to excel in the classroom in addition to his commitment to serving his community.

During a recent experiential rotation with Murphy, Malott reviewed academic policies and assessment plans and assisted in preparing the College of Pharmacy and Pharmaceutical Sciences’ interim accreditation report.

“Jared is very meticulous and always maintains a positive attitude,” Murphy said. “Jared is a role model for other Pharm.D. students. He is going to be an exceptional pharmacist. I look forward to seeing all of the amazing things he accomplishes throughout his career.”