Protein crystals prepared by researchers at The University of Toledo and grown aboard the International Space Station could one day help scientists better understand basic life functions at the molecular level, unlocking some of the greatest secrets of biochemistry.

Earlier this year, a SpaceX capsule loaded with more than 150 crystals splashed down in the Pacific Ocean after spending six months and traveling some 50 million miles in low Earth orbit. Following retrieval by NASA, the experimental cargo was transported to the Oak Ridge National Laboratory for analysis. 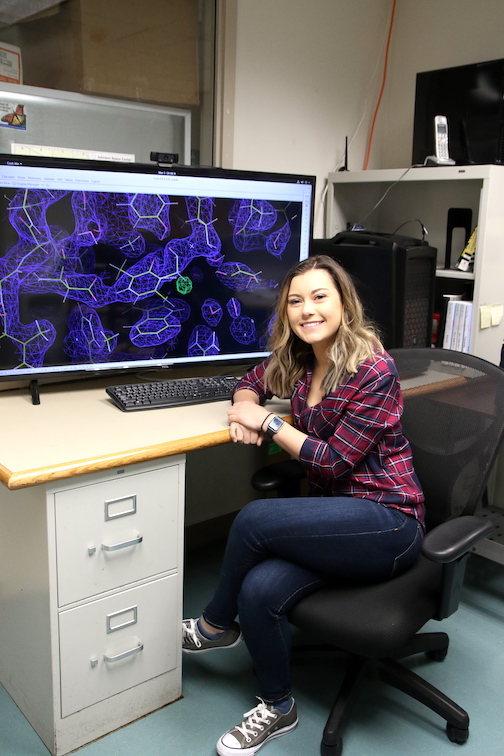 UToledo’s mission? Growing near-perfect crystals large enough to be used in neutron diffraction — a high-tech process that enables researchers to map out the precise location of a molecule’s every single atom.

“We have been able to view our metabolic world at the atomic level for quite some time now. However, hydrogen, the smallest of atoms and responsible for most of the activity, cannot be seen,” said Dr. Timothy Mueser, professor of chemistry and biochemistry in the UToledo College of Natural Sciences and Mathematics. “Neutrons allow us to see the missing hydrogens, but the signal is very weak. We need extraordinarily large crystals for the technique to work, and crystal growth in microgravity on the International Space Station is vital to achieving that.”

Mueser’s lab is one of only a handful of groups in the United States working on neutron crystallography. They’ve sent experiments on three prior space flights and regularly collaborate with Oak Ridge National Lab and Institut Laue-Langevin, a leading nuclear research facility in Grenoble, France.

“There’s a lot of good research that’s going on here,” said Victoria Drago, a third-year Ph.D. candidate in Mueser’s lab, who helped design the unique crystal growth system aboard the International Space Station. “From the 2018 flight, we determined that our setup works. The only thing we saw problems with was that we were not getting much growth when they returned. That indicated we didn’t leave the crystals up there long enough. On the most recent flight, we got back several neutron-worth crystals.”

On that flight, which launched in July 2016, the International Space Station National Lab allowed the experiments to stay on board for six months. The extra time improved results dramatically. Several crystals on the flight grew five to 10 times larger than comparable crystals previously grown on Earth and contained no noticeable defects.

Some of those crystals are scheduled to be taken to the Institut Laue-Langevin this spring for further validation and, hopefully, a complete neutron diffraction analysis. That analysis could unlock precise atomic details about the active form of vitamin B-6, which is essential for a number of metabolic processes in the human body.

Equally — if not more — important is proving the viability and success of UToledo’s novel technique for growing crystals in microgravity.

After disappointing results with another commercially available growth system on their first flight, UToledo researchers developed their own system, which was approved by NASA for the second and third flights. Slightly larger than a deck of playing cards and costing about $100, the system is significantly less expensive and smaller than others. With real estate aboard the International Space Station extremely limited and costly, the size of UToledo’s apparatus makes it particularly appealing.

The hope is that UToledo’s system may make it possible for an explosion of new research to define an array of metabolic processes with major ramifications in the understanding of human health and treatment of disease.

“We’re not in the field where we’re going to be designing drugs, but it could be really useful in that if you truly understand the mechanism at a molecular level, versus making speculations, you can better inhibit it,” Drago said. “We’ve already shown with some of our previous research that we can redefine mechanisms this way to make things a little bit clearer. Down the road, people could use this for better drug design.”

Drago, who completed an undergraduate degree in biochemistry at UToledo, returned to UToledo to pursue her doctorate specifically to work in Mueser’s lab. The decision has afforded her unique opportunities, including being present for the launch of two SpaceX rockets that carried their experiments to the International Space Station and working closely with national and international laboratories.

“I’ve got to experience a lot because of coming here. I wouldn’t be doing what I’m doing and I wouldn’t have the connections I have if I was anywhere else,” Drago said.

Growing protein crystals in space offers several benefits over earthbound growth, but one of the most prominent is that it slows down the entire process.

“Slow crystal growth is good crystal growth,” said Dr. Constance Schall, UToledo professor of chemical engineering, who is one of the researchers involved in the project. “It’s kind of like a crowd trying to get into a door. If you take your time and line everybody up in an orderly fashion, things go much more smoothly. Zero gravity slows the growth and removes convection currents. You end up with much larger and higher quality crystals.”

Smaller, microscopic crystals can be used to map out atomic positioning of proteins via X-ray crystallography, but the process does not show the location of hydrogen atoms or protons.

Neutron crystallography shows those atoms, but it requires the significantly bigger, more perfect crystals that Mueser’s team is growing. Several of the crystals that returned in January were about 1 cubic millimeter.

“This is very exciting work, and I’m grateful to be part of it,” Drago said.” Our Toledo Crystallization Box has the ability to mainstream large crystal growth for the neutron crystallography community, the largest and most time-consuming obstacle in this work. We are in the process of trying to secure more flights with the Toledo Crystallization Box to the International Space Station in order to benefit both our research and others in the field.”