The University of Toledo Medical Center has completed its first robotic-assisted kidney transplant surgery, joining a select group of hospitals nationwide that perform the state-of-the-art procedure.

The successful surgery, completed April 12, was led by Dr. Obi Ekwenna, a transplant and urologic surgeon at UTMC and associate professor at The University of Toledo College of Medicine and Life Sciences. 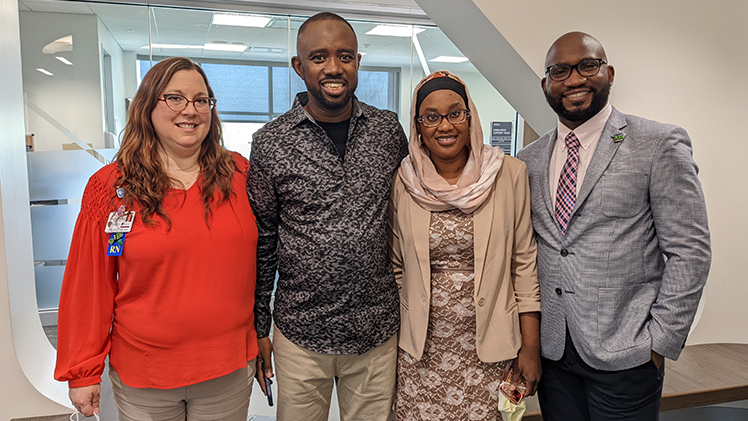 Ahmadou Diallo, second from left, is the first patient to undergo robotic-assisted kidney transplant surgery at UTMC. Diallo’s successful surgery, performed last month, was made possible by a kidney donation from his wife, Faty Diallo. The Diallos are joined by UTMC living donor coordinator Constance Cashen, left, and Dr. Obi Ekwenna, right, the transplant surgeon who performed the cutting-edge procedure.

“We’ve been doing transplantation the same way for nearly 70 years,” Ekwenna said. “Only within the last 10 years have people seriously begun looking at robotics for kidney transplant. There are significant benefits for the patient, but it hasn’t yet been widely adopted. We at UTMC are doing now what everyone else is aiming to do.”

UTMC is the second transplant center in Ohio to offer robotic-assisted kidney transplant and one of only a handful nationwide.

Ahmadou Diallo, a nurse from suburban Indianapolis, received the kidney from his wife, Faty Diallo. Diallo had been on dialysis since 2018, with his recent regimen calling for daily treatments.

“I was really sick,” he said. “I used to take my kids to the park, to go swimming. I couldn’t get in the water. I couldn’t take my daughter to the zoo. It would take two hours to get her dressed and to daycare because I had no energy. My kids missed out on a lot, and that was the worst part of the process to me.”

One of the key benefits of robotic kidney surgery is how much less invasive it is than a traditional open surgery.

Rather than a large hockey stick-shaped cut, the robotic-assisted technique employs five small keyhole-size incisions for surgical instruments and 1.5-inch-wide incision to bring the donated kidney into the abdomen.

“Robotic-assisted transplantation allows for all the clinical benefits of minimally invasive surgery,” Ekwenna said. “There tends to be less pain, less blood loss, a lower risk of infection and a faster recovery.”

Diallo was discharged within 48 hours of his procedure, far sooner than what would be expected had he undergone a traditional open transplant.

His recovery has continued to progress well. Four days after his surgery, Diallo, a devout Muslim, was able to perform his five full prayers normally.

“I can bend down and get up. That was very important to me,” he said. “I can’t tell you how blessed I am today to have a kidney and I’m hoping to get back to normal life, to do what I used to do with my family.” 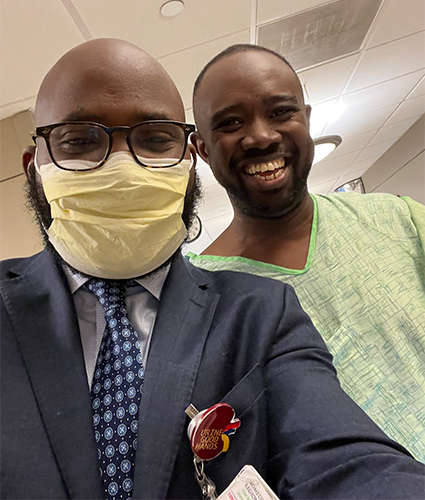 Dr. Obi Ekwenna, left, the transplant surgeon who performed the cutting-edge procedure, takes a selfie with his patient, Ahmadou Diallo, a nurse from suburban Indianapolis.

UTMC’s transplant program has grown significantly in recent years, going from 98 transplants in 2019 to a record 174 last year. As the program expands, Ekwenna said it’s critical to continue innovating and incorporating the latest methods and technologies.

Ekwenna had initiated a robotic-assisted donor nephrectomy program in 2016, which laid the foundation for the groundbreaking robotic procedure. The transplant team at UTMC has been preparing and training for more than three years for the recipient surgery.

Ekwenna expects most future robotic transplants will be done on patients who, like Diallo, are receiving a living donor kidney and therefore are able to be planned in advance. With time, he believes the technique will be adopted more readily in deceased donor kidney transplants.

The greatest potential for robotic-assisted transplant may be in individuals who have a high body mass index. Unlike at some transplant centers, a high BMI is not on its own disqualifying at UTMC. Each patient’s overall whole health is evaluated, and UTMC does perform transplants on high-BMI individuals.

However, Ekwenna said those surgeries are more challenging, take longer and tend to bring higher risk of complications like surgical site infections and wound complications.

“Robotic surgery can be a game changer for those patients,” he said. “Being able to introduce the kidney through a small incision and then sew under high magnification allows us to avoid some of those challenges. We think there’s a lot of potential to help more patients and improve outcomes. The entire team deserves a lot of credit for making this first procedure successful.”

For Diallo, there was little hesitation about being UTMC’s first robotic transplant patient.

“I was kind of nervous at first, but after talking to the doctor I was not worried,” Diallo said. “He had my trust and I wasn’t going to second guess because I knew he was going to do whatever is best for me.”

He and his wife have returned home and are both recovering well. He also made a commitment to volunteer at a kidney clinic when he’s well enough.

“This hospital has done a lot for us,” he said. “The care here was fantastic. All the people in the clinic were phenomenal.”

As for his wife’s gift, he struggles to quantify what it meant to him — and their family.