Dr. Svitlana Zhukivska approached Ukraine’s border with Hungary, apprehensive about getting through the busy checkpoint.

It was mid-April and her vehicle was loaded with wound wraps, antibiotics, surgical screws and other desperately needed medical supplies, but it wasn’t clear how quickly her party would be permitted to enter the war-torn country. 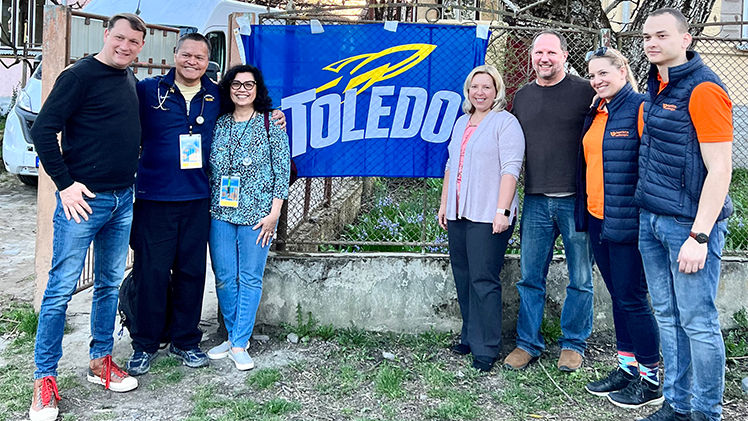 “We had been warned that it probably would be very difficult to go through customs because of the medications and medical supplies we had with us,” she said. “Everything was being searched.”

This, however, was different. Ukraine was at war. It also was personal — Zhukivska was born in western Ukraine and completed medical school there before coming to the United States for her residency.

“I wanted to at least do something to help,” she said. “I do feel guilty. I live here in safety. I have my family with me. I don’t have to be scared. The people in Ukraine are going through so much suffering.”

Ultimately, Zhukivska and her companions — which included three other Toledo-area medical professionals and representatives from the relief organization Hungarian Baptist Aid — were waved through in just 15 minutes with their bags, carefully packed with life-saving supplies.

The speedy entry into Ukraine allowed the group not only to deliver the critical supplies but provided time for them to treat refugees who had fled Russian bombardment in central and eastern Ukraine.

After securing permission from the mayor of Berehove, a city of roughly 23,000 people 5 miles from the Hungarian border, the team set up a clinic where they distributed prescription medications, multivitamins and tended to minor injuries and illnesses.

Many of the refugees Zhukivska met had been in Kyiv’s bomb shelters for days, hoping the shelling would pass. When they finally decided to flee, they had less than half-an-hour to collect what was left from their apartments.

“There is a huge need for medical care for those who are displaced,” she said. “The refugees have limited medications and they don’t have access to their doctors after they’ve fled.”

Other medical supplies and medications were given to local hospitals, including one where a medical school classmate of Zhukivska’s now works as a trauma surgeon tending to wounded Ukrainian soldiers who are stabilized in the field and then sent to western Ukraine for treatment.

The trip was organized by SCORE, which is part of the nonprofit Filipino Association of Toledo, and Dr. Richard Paat, a local emergency medicine physician and clinical professor of medicine in the UToledo College of Medicine and Life Sciences.

Paat and Zhukivska have worked together on medical aid projects for several years, including the UToledo Community Care Clinics, a student-run organization established to deliver healthcare to underserved populations in the Toledo community.

Because the trip came together so quickly, Zhukivska had little time to plan for her absence, but she said her colleagues were more than willing to help.

“Everyone stepped in. People from my department stepped in to cover my rounding. I felt so supported to go,” she said. “Everyone tried to help as much as possible when I spread the word about the need for supplies. I’m really grateful.”

The group is planning to return to Ukraine again with additional medication and supplies and schedule more time to provide medical care to refugees.

Individuals can donate to the cause on the SCORE website.