Jack Edminister can trace his inquisitive nature back to his childhood.

At the age of 6, his 8-year-old brother was diagnosed with Type 1 diabetes. He began asking questions as part of that new challenge for his family — and showing the hunger for knowledge that would foreshadow his later career.

“Once my brother was diagnosed, I quickly became interested in some unfamiliar words and concepts,” said Edminister, who will graduate with a doctor of medicine degree Friday, May 15, from the UToledo College of Medicine and Life Sciences. “I started asking what a pancreas is, what insulin does and why it’s important. Those were life-saving pieces of information for my brother.”

Growing up in Akron, Ohio, Edminister followed up that early curiosity with a request to his instructors during his sophomore year in high school to allow him to take an AP chemistry class as a junior. He and a friend successfully lobbied and were able to take the course the following year.

Edminister went on to earn a bachelor of science in biology from Ohio State University in 2014.

“During my undergraduate experience, the idea was there, of how to use my love of science,” Edminister said. “But once I interviewed at The University of Toledo for medical school, I knew this was where I belonged. The collaborative atmosphere among everyone I met, students and faculty, made me feel right at home.”

As he made his way through medical school, Edminister ultimately settled on dermatology as his field of medicine. While it’s a competitive specialty, the choice was made clear by a combination of faculty mentorship and his interactions with patients during clinical rotations.

“My experiences showed me that I wanted to impact people directly, not from behind the scenes,” Edminister said. “I saw firsthand how certain dermatological patients would enter the clinic very defeated by their conditions and would leave more confident as they received treatment. I’m invigorated by helping people in that way.” 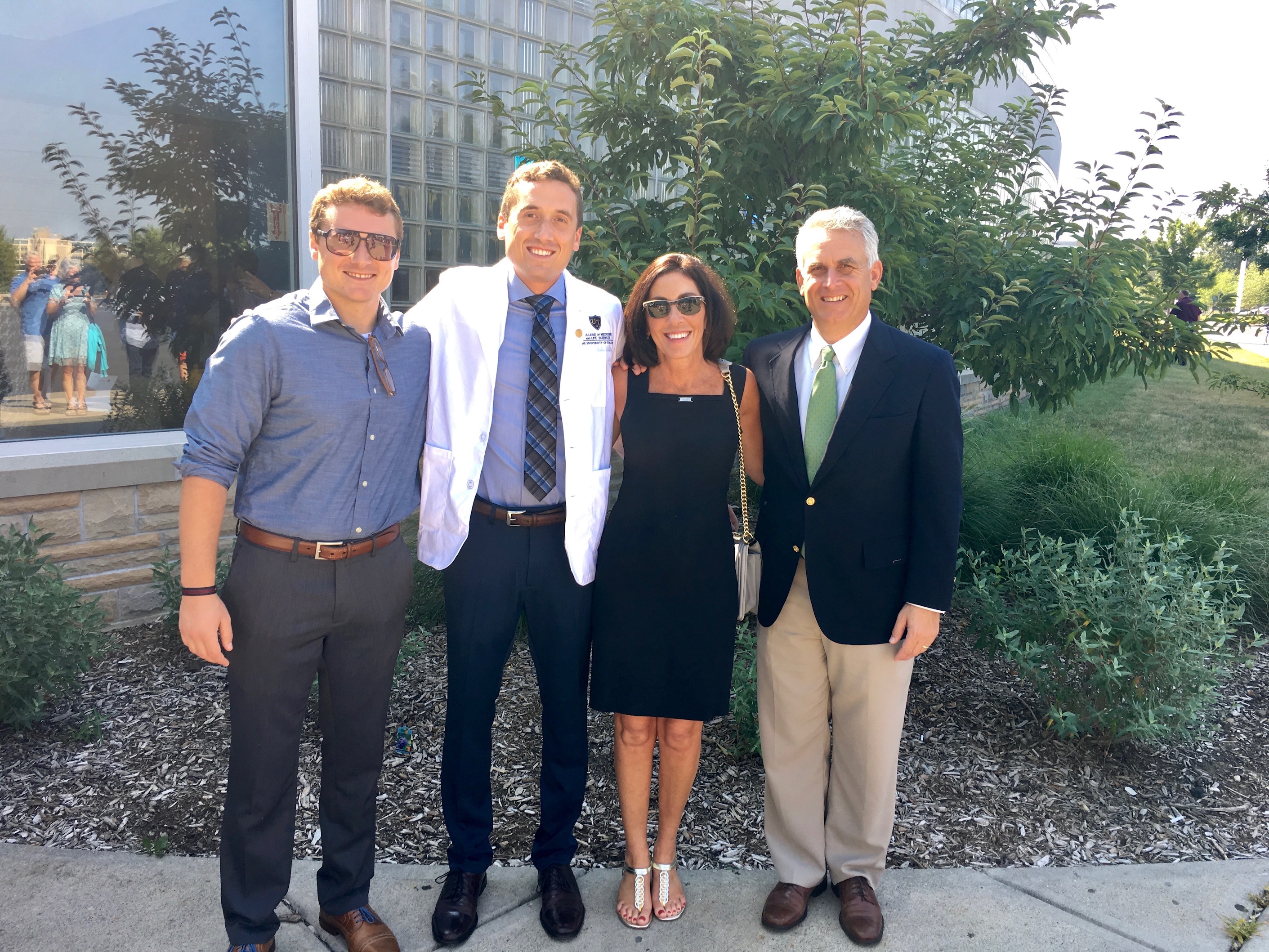 Jack Edminister, second from left, received his white coat when starting medical school at UToledo in 2016. Edminister, pictured here with his brother, George, left, mother, Alice, and father, John, is specializing in dermatology.

Dr. Lorie Gottwald, professor of medicine and chief of the Division of Dermatology, is one of the instructors who inspired Edminister to pursue dermatology as a career.

“His sensitivity toward patients is unparalleled; he makes everyone comfortable and confident in his presence,” Gottwald said. “He is the kind of individual you would be proud to call a brother, a son, a family member. I am just extremely proud to call him my student. I know he will make his mark.”

During UToledo’s virtual Match Day event in March, Edminister learned that he will perform his three-year residency at Wake Forest University beginning in July 2021. First, however, his transitional year as a medical intern will be completed at hospitals of the Mercy Health system in the Toledo area.

Edminister expects the ongoing COVID-19 health crisis to play a large role during that transitional year. He’s better able to face that challenge thanks to two things: the support he received during medical school, and a bedside manner reflected in his induction to the Gold Humanism Honor Society after being nominated by his peers and UToledo faculty.

“It was a huge honor to be selected. That’s why I’m going into medicine, to impact people in a positive, respectful way,” Edminister said.

“We’re entering the medical field at an interesting time. But the people around me always believed in me, perhaps more than I believed in myself. I’m honored to call this year’s other graduates my colleagues.”