To say that Luke Knapke took advantage of his basketball scholarship from The University of Toledo would be an understatement.

On the hardwood, Knapke went from becoming a big man “project” out of high school to becoming one of the best centers in Rocket history. In the classroom, he earned a bachelor’s degree and a master’s degree during his five years on campus. It goes without saying he is extremely thankful for the opportunity he was provided.

“Being part of the basketball program was very, very special to me,” Knapke said. “I made a lot of great friendships and had the pleasure of being led by a lot of great coaches. Each person that was a part of Toledo basketball impacted me in a way that I will not forget.”

Rocket fans certainly won’t forget Knapke’s contributions on the court. He was part of teams that won 82 games and a pair of Mid-American Conference West Division titles. He finished his career as the program’s all-time leader in blocked shots and is one of five individuals to score more than 1,400 points and grab at least 800 rebounds.

Head Coach Tod Kowalczyk credits much of Knapke’s on-court success to his determination to be the best.

“Luke is one of the hardest workers I’ve coached,” Kowalczyk said. “We knew there was a good possibility he would be a very good player, but to his credit, he put the work in every day to reach his potential.”

That type of perseverance transferred into the classroom as well for Knapke, who was a double major in marketing and management as an undergrad. After graduating in May 2019, the four-time Academic All-MAC team member continued his studies and will receive his master’s degree in recreation and leisure studies this spring. Outside of the classroom, the Maria Stein, Ohio, native also completed summer internships with the Toledo Mud Hens, Toledo Walleye and Team Sports. 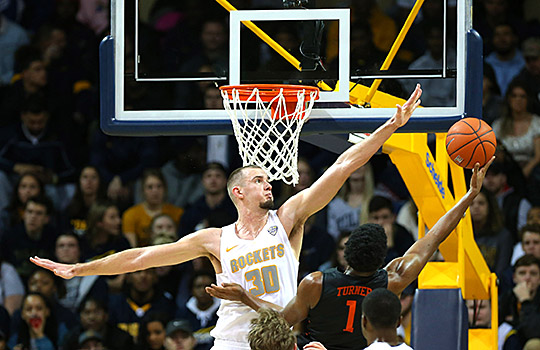 Luke Knapke finished his Toledo career as the program’s all-time leader in blocked shots and is one of five individuals to score more than 1,400 points and grab at least 800 rebounds.

“I learned different things from each of my internships,” Knapke said. “With the Mud Hens and Walleye, I Iearned how promotions are developed. I also saw how they set up their ticket and merchandise sales for their fans. With Team Sports, I found out about what really goes into the equipment side of sports.”

His experiences on and off the court have allowed Knapke to grow into the person he is today.

“I am a much better leader than I was coming in as a freshman,” Knapke said. “I am much more comfortable talking with people I may not know, and I know what it takes to be successful outside of basketball based off what we learned in basketball.”

Now Knapke is ready to explore the world using the tools he acquired as a member of the men’s basketball program. Next fall, he will begin his professional career in Belgium.

“Playing professional basketball is something I’ve always dreamed of and it feels really good to have the opportunity to make that a reality.”