When Jan Tipton’s youngest child enrolled at The University of Toledo in 2017, she did too.

Tipton, an advanced practice nurse and manager of the infusion center at the Eleanor N. Dana Cancer Center, was finally ready to fulfill a longtime dream of earning her doctorate.

“Getting my doctoral degree just seemed like the next step in my professional career,” Tipton said. “I’d been thinking about it for a long time and others had encouraged me to do it, but I waited a while to get my kids through high school before I decided to go for it.”

On Friday, May 7, she’ll graduate from the College of Nursing with a doctorate of nursing practice — one day ahead of her daughter, who is earning an undergraduate biology degree from UToledo at the spring commencement ceremonies.

Tipton balanced the program’s coursework and clinical requirements with her full-time job at The University of Toledo Medical Center, where she’s worked in various roles since 1988.

As manager of UTMC’s infusion center since 2014, she oversees care coordination, staff education and collaborates with other patient service lines, such as pharmacy and the hospital’s financial navigators. She also provides direct healthcare delivery.

“She goes above and beyond all the time, always looking for new ways to do things for our patients — hence continuing on in her education,” said Chris Kosinski, director of the Eleanor N. Dana Cancer Center. “This isn’t a ‘look at me’ accolade, this is Jan doing something that will ultimately help her better serve our cancer patient community.” 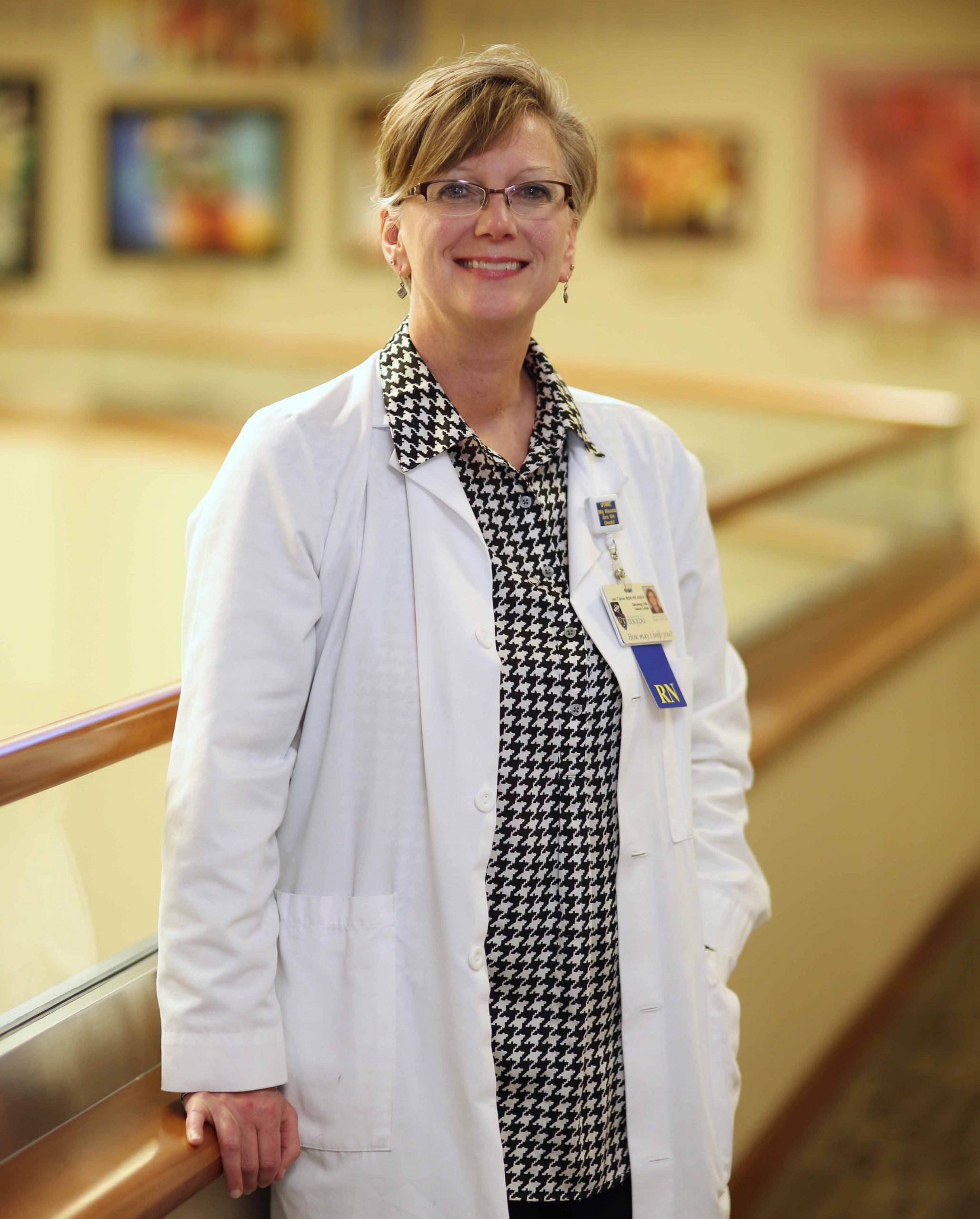 By earning her doctorate, Janelle Tipton, an advanced practice nurse and manager of the infusion center at the Eleanor N. Dana Cancer Center, is fulfilling a longtime dream.

Returning to school after decades of clinical experience was an adjustment, but Tipton said it was well worth the effort.

“In nursing, there’s always more to learn. That’s been part of me for as long as I’ve known,” she said. “The coursework and everything about the program fit in nicely with my clinical practice. There are so many things that I’m drawing upon now that have helped me think creatively, collaborate more and broaden my thinking about different clinical problems.”

Tipton’s connections to the University run deep. She earned her bachelor’s degree through the former nursing education consortium program between UToledo and Bowling Green State University and met her husband, who has a master’s degree from UToledo, in the Mulford Library. In addition to her daughter who is also graduating, her son also earned an engineering degree from UToledo three years ago.

Becoming a student again further engrained her in the University community.

“I’ve always been drawn to the academic side, the teaching and learning mission of the facility,” she said. “I’ve been able to spend time working with lots of different people across disciplines on both our campuses. That’s been inspiring.”

Tipton will be among the speakers at the College of Nursing’s convocation ceremony on Friday at John F. Savage Arena.

Kosinski said it’s an honor befitting the caliber of person and colleague that Tipton is.

“There are a few people in my life who I think of as the smartest people I have ever come in contact with. Jan is one of those people,” he said. “I respect her very much for continuing on in her education and achieving her doctorate in nursing practice.”