Astronomers at The University of Toledo were selected by NASA to lead five of the first research projects on the James Webb Space Telescope, a new infrared telescope scheduled to launch in October.

One of the projects is led by a UToledo graduate student.

“While it’s exciting for our program to have five accepted proposals in the first observing cycle of this highly competitive, next-generation space telescope, the real thrill came from Ph.D. Student Thomas Lai’s success with his proposal targeting a unique starburst galaxy,” said Dr. J.D. Smith, director of UToledo Ritter Astrophysical Research Center and professor of astronomy. 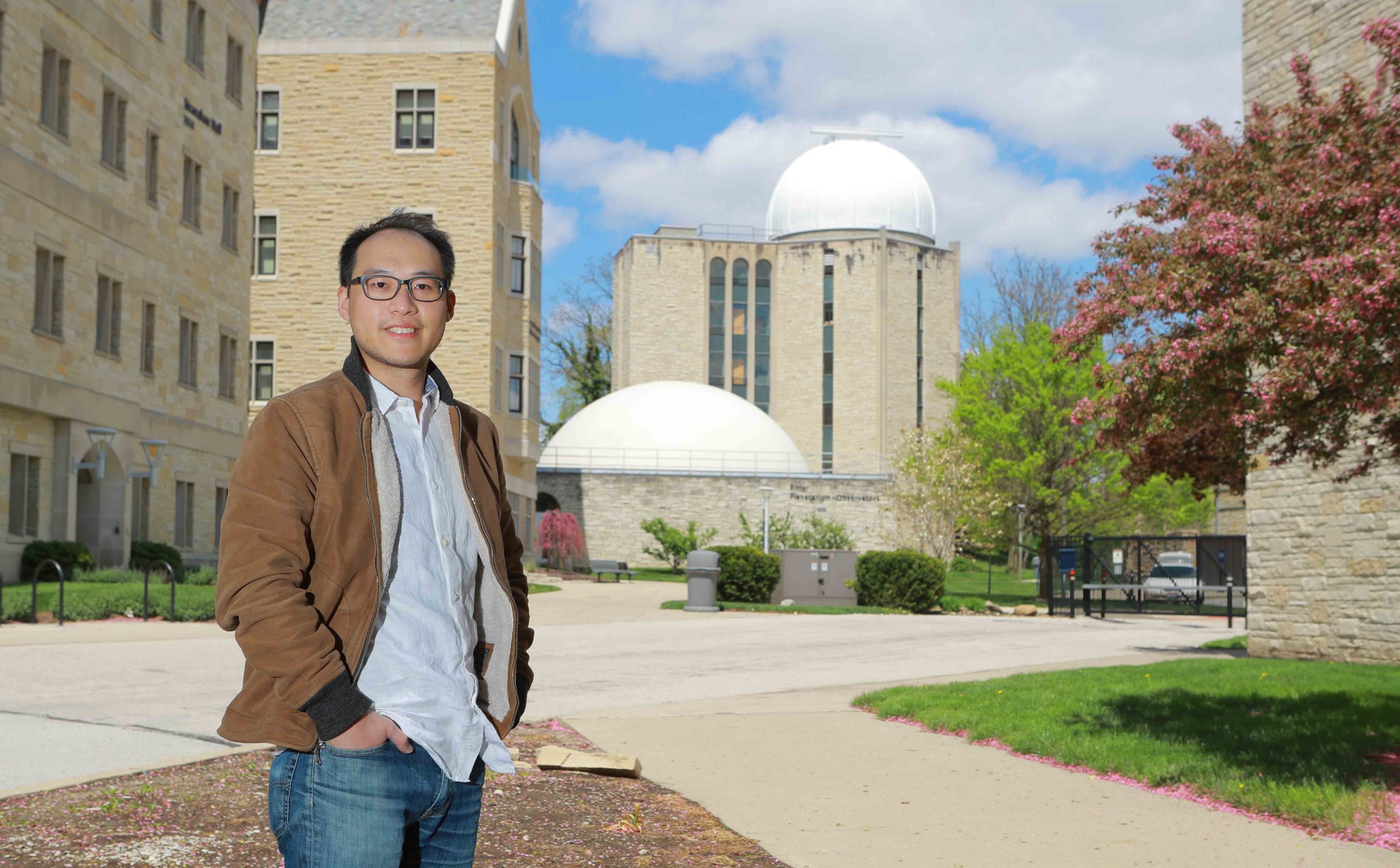 UToledo graduate student Thomas Lai, who is scheduled to graduate in May with a doctorate in physics and astronomy, is leading an international team of 10 other researchers on a project titled ‘How Do the Small Survive.’

Students lead 8.7% of selected proposals, according to the Space Telescope Science Institute.

Lai, who is scheduled to graduate in May with a doctorate in physics and astronomy, is leading an international team of 10 other researchers on a project titled “How Do the Small Survive.” They will observe a galaxy called II Zw 40 that is roughly 33 million light years away from Earth and hosts one of the most intensive star-forming regions in the local universe.

“I feel extremely fortunate to have the opportunity to use this flagship NASA space observatory,” Lai said. “Using the power of the James Webb Space Telescope we will be able to study how dust behaves near the sites of intense star formation with unprecedented high spatial resolution. Ultimately, we would like to answer the questions on why and how small dust grains survive in the universe despite strong radiation fields produced by newly formed young stars.”

UToledo is ranked No. 6 among all institutions worldwide in terms of successful proposals for the first cycle of the James Webb Space Telescope.

From more than 1,000 submitted proposals, NASA selected 286 projects to address a wide variety of scientific areas. Proposals are split into eight different categories – planets, stars and galaxies, for example.

“Nearly 20% of the star time is going to UToledo because of our large programs in that category,” said Dr. Michael Cushing, professor of physics and astronomy and director of UToledo Ritter Planetarium. “Of the 740 hours awarded in the category of Stellar Physics and Stellar Types, 140 hours went to UToledo.”

Cushing is leading a project titled, “Bolometric Luminosities of Cool Brown Dwarfs: The Key to Their Effective Temperatures and the Mass Function.”

“The initial year of Webb’s observations will provide the first opportunity for a diverse range of scientists around the world to observe particular targets with NASA’s next great space observatory,” said Dr. Thomas Zurbuchen, associate administrator for the Science Mission Directorate at NASA. “The amazing science that will be shared with the global community will be audacious and profound.”

•  “Come Out, Come Out, Wherever You Are: Seeking All the Massive Young Clusters Hidden in the Antennae” by Dr. Rupali Chandar, professor of astronomy; and

•  “Investigating Protostellar Accretion Across the Mass Spectrum” by Dr. Tom Megeath, professor of physics and astronomy.

“The James Webb Space Telescope is going to completely transform our understanding of galaxies, star formation and ultra-cool stars, and UToledo astrophysicists have real strengths in these research areas,” Smith said. “Our group is also deeply experienced in exploiting JWST’s long infrared wavelengths of light to study the cold, dust-veiled universe. Now all our eyes are on the space telescope’s Halloween launch later this year.”

Webb will begin observing the universe in 2022 after the spacecraft unfolds, travels a million miles and checks the functioning of all of its instruments.

“We are opening the infrared treasure chest, and surprises are guaranteed,” said Dr. John C. Mather, senior project scientist for the Webb mission and senior astrophysicist at NASA’s Goddard Space Flight Center in Greenbelt, Md. “How did the universe make galaxies, stars, black holes and planets, and our own very special little Earth? I don’t know yet, but we are getting closer every day.”

General observer time with Webb is extremely competitive. As a result, the proposal selection process conducted by the Telescope Allocation Committee is both rigorous and meticulous. The committee was comprised of nearly 200 members of the worldwide astronomical community who were assigned to 19 different panels covering broad scientific topics.

Using a dual-anonymous review, where the identities of the proposing investigator and team were concealed, the scientific merit of each proposal was evaluated and ranked. The final, ranked list of selected proposals was presented to the Space Telescope Science Institute’s Director, Dr. Kenneth Sembach, for review and approval.

“The first observing cycle with a new observatory is always special, especially one as powerful and highly anticipated as Webb. We had an incredibly interesting couple of weeks of intense proposal reviews during which the reviewers did a great job of sorting through and ranking all the possible science cases proposed. I commend them for their hard work, especially under pandemic conditions,” said Sembach. “I’m very pleased to be able to approve such a strong science program for the observatory. These observations are going to provide stunning views of the universe and lead us in new investigative directions that will set the stage for decades of research.”