University of Toledo safety Tycen Anderson and cornerback Samuel Womack were both selected in the fifth round of the 2022 NFL Draft on Saturday.

Anderson was chosen by the AFC champion Cincinnati Bengals as the 166th overall pick of the draft. Womack was taken by San Francisco just six picks later as the 172nd pick. 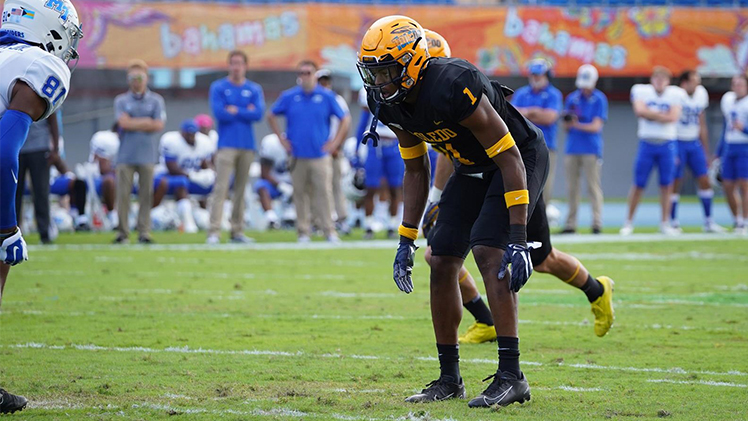 University of Toledo safety Tycen Anderson led the charge after he was chosen by the AFC champion Cincinnati Bengals as the 166th overall pick of the draft.

In addition, The University of Toledo running back Bryant Koback was signed as a free agent by the Minnesota Vikings on Saturday following the conclusion of the 2022 NFL Draft, and five former Toledo Rockets have been invited to mini-camp tryouts with NFL teams.

Punter Bailey Flint and offensive lineman Vitaliy Gurman were invited to the Pittsburgh Steelers mini-camp, and linebacker Jonathan Jones (Kansas City Chiefs), tight end Drew Rosi (Baltimore Ravens) and long snapper Sean Mills (Tennessee Titans) were also invited to NFL camps.
Anderson, who was joined by almost 100 family and friends at his home in Toledo for the draft, was anxious when he got the call from the team.

“My stomach just dropped. I was hoping that was the real number that came up on the caller ID on my phone,” he said. “I was walking on clouds. I was thinking, did this just really happen? I’m just incredibly blessed and happy.”
Womack, who watched the draft with family and friends from his home in Detroit, had a similar reaction.

“I wanted to look at the TV to see it on the screen to make sure it was for real,” he said “It felt amazing. It was an incredible, surreal feeling.”

Flint, a native of Australia, was Toledo’s punter for the past five seasons and was twice nominated for the Ray Guy Award as the nation’s top punter. His best season was in 2019 when he averaged 47.3 yards per punt before suffering a season-ending injury. Flint also was drafted by the Hamilton Ti-Cats in the CFL Global Draft, taken as the second pick of the first round.

Gurman was a third-team All-MAC selection in 2021. He played two seasons on the offensive line for Toledo after joining the Rockets as a graduate transfer from Edinboro.

Jones, a graduate transfer from Notre Dame, played two seasons for the Rockets. He earned second-team All-MAC honors at linebacker in 2021, leading the squad with 97 tackles.

Rosi played in 49 games through five seasons for the Rockets, making 49 receptions and scoring four touchdowns. His best season came in 2019 when he caught 18 passes for 238 yards.

Mills served as Toledo’s long snapper for the past four seasons after transferring from Illinois. He was twice named to the Mannelly Award watch list as the nation’s best long snapper.