Morgan Paaverud has been filled with a competitive spirit since grade school. Growing up in Anoka, Minn., she earned a spot on her high school’s swim team as a seventh-grader. She excelled in that sport to the point where she qualified for the state meet as a sophomore and junior.

During that time, however, she discovered a passion for softball. By her sophomore year, she was traveling around the country, competing in national tournaments and improving her skills. It was then that she started to realize where her future lay.

“As I started putting more time into softball, I developed friendships with teammates who also had the love for softball and dreamed about playing college softball,” Paaverud said. “They pushed me to work even harder than I was. I began to fall in love with it. Swimming definitely kept me in shape, but my heart was in softball.”

It was that love for softball that brought Paaverud to the Glass City as she accepted a scholarship to play for the Rockets in 2016. Her experience at UToledo lived up to her expectations and more.

“My experience as a softball player here was unbelievable,” Paaverud said. “It molded me into the person I am today. I learned the true meaning of what hard work really is. From putting in the extra practice time, to 6 a.m. workouts, to the time spent in the classroom.”

Paaverud’s academic efforts can be seen by her 3.65 grade-point average. She will receive her bachelor’s degree in recreational therapy Saturday, May 9. It’s a field that is responsible for planning, organizing and directing recreational activities to promote health and well-being for patients who are physically, mentally or emotionally disabled. She plans on taking a national exam to become a recreational therapist in July and then apply for occupational therapy school in fall 2021. 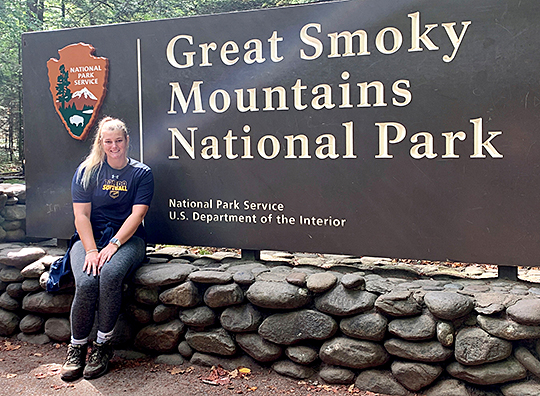 Morgan Paaverud posed for a photo during a UToledo class trip to the Smoky Mountains to learn how to facilitate an outdoors group while navigating risks when hiking in the mountains.

“I really didn’t know what recreational therapy was as a freshman, but a former academic advisor thought I would like it and the impact it has on individuals,” said Paaverud, who arrived on the UToledo campus as an exercise science major. “It has been the best experience. Our Recreational Therapy Program is one of the best in the country and prepares you for the real world. There are five different clinical rotations and an internship that prepares us to be the best therapist possible.”

Paaverud also was pushed to excel on the softball diamond. After coming off the bench in her first two seasons as a Rocket, she opened her junior year as the team’s starting first baseman. Midway through the year, though, she was hitting just .111 at the plate, nowhere close to her own expectations. She found herself on the bench, but wasn’t ready to quit on herself. 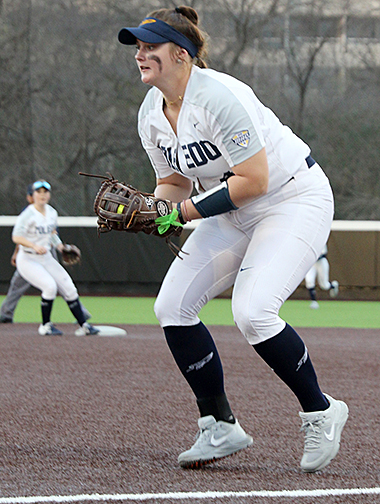 “Morgan came to me asking for another shot at playing time,” Coach Joe Abraham said. “She wasn’t hitting well and had been benched the previous weekend against Akron. We were playing Oakland in a mid-week doubleheader, and I was planning to give her one start anyway. We started her in the first game and she had a huge game. Then we started her in game two. She had another big game. She was a starter for us from that point forward.”

“The key for me was to be relentless,” Paaverud said. “I knew that if I wanted something, I needed to keep working for it. I knew if I wanted to be a starter, I had to have an outstanding game. I happened to go 6 for 7 with a home run and five RBIs that day. It was the best day I have ever had in my career. It showed me the importance of working hard and to keep pushing to get what you want.”

Paaverud and her teammates displayed that same attitude at the end of their 2019 season. That’s when the Rockets came out of the consolation bracket to become the lowest seed ever to win the Mid-American Conference Tournament.

“We never gave up. We kept pushing and grinding it out until it was over,” Morgan said. “I feel like that is a true definition of anything is possible. We barely made it into the tournament as the No. 7 seed and then won five games in less than 48 hours to win it all. It felt like I was on cloud nine for the week after we won it. It still feels surreal. It’s a memory I will cherish forever in my softball career as a Rocket.”