Marcus Reed, a first-generation college student, has wanted to be a lawyer for as long as he can remember.

“My mom would say I knew I wanted to be a lawyer right out of the womb,” Reed said. “When they would ask kids what they wanted to do when they grow up, I would always say lawyer.”

On Sunday afternoon, Reed graduated in the top 5% of his class during the College of Law’s commencement ceremony in Savage Arena.

Upon passing the bar exam, Reed will join the United States Department of Labor in Washington as an honors attorney in the Office of the Solicitor.

The Honors Program is a unique opportunity to work in one of the largest legal offices in the federal government and gain a broad knowledge of labor and employment matters that would be difficult to obtain in years of private practice.

“That’s always been my dream,” he said. “I’ve always wanted to go to Washington, D.C.”

Throughout law school, Reed gained valuable experience on how to best advocate for workers’ rights both as a law clerk with the Ohio Patrolmen’s Benevolent Association (OPBA) and as a legal intern with the American Federation of State, County and Municipal Employees (AFSCME) Ohio Council 8.

Reed’s passion for labor and employment law developed after his dad, a firefighter and past president of the local firefighters union in Canton, let him skip school to protest Ohio Senate Bill 5, which would have stripped employees of their right to collective bargaining. 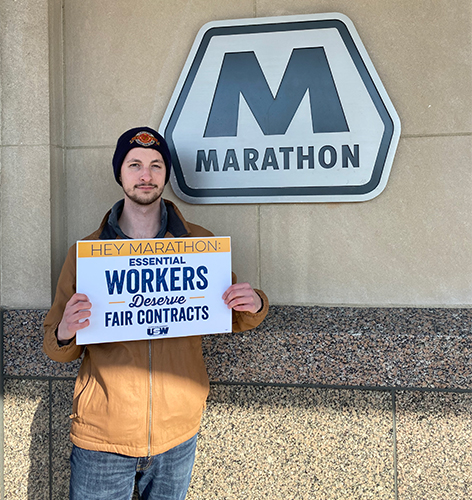 The reputation of the College of Law’s certificate in labor and employment law and its distinguished faculty are among the many reasons Marcus Reed chose UToledo.

“I remember vividly the sea of firefighters wearing their turnout gear and helmets with signs pointed high in the air that read ‘Justice for Local Workers,’ ” Reed said. “When Senate Bill 5 was overwhelmingly repealed by a voter referendum, I witnessed the value and importance that labor law played in the lives of every worker. This experience was the catalyst behind my desire to use my law degree to advocate for and enforce laws that protect the rights and interests of workers.”

The reputation of the College of Law’s certificate in labor and employment law and its distinguished faculty are among the many reasons Reed chose UToledo. In particular, Reed admired Joseph E. Slater, Distinguished University Professor and Eugene N. Balk Professor of Law and Values, who has written several books on the subject.

“Professor Slater wrote the book on labor laws,” Reed said. “As a first-generation college and law student, I have been honored to pursue my law degree at The University of Toledo and to learn from leading experts in the field of labor and employment law.”

Slater mentored Reed in various capacities throughout his law school journey, witnessing firsthand his dedication to achieving his lifelong dream of becoming a lawyer.

“Marcus Reed is one of the very best students I have had the pleasure of teaching in my 23 years at The University of Toledo College of Law,” Slater said. “In multiple classes with me, his exam scores were at the very top. His class participation consistently shows both mastery of the black-letter rules and a keen understanding of the policy implications of those rules. He was a very helpful teaching assistant for me in Torts, he played a valuable leadership role in the Labor and Employment Law Association and his law review note, which I supervised, was excellent.

“Beyond his impressive skills in legal research, writing and analysis, Marcus is a truly nice and thoughtful person. He has been a delight to teach and to get to know.”