When Kennedy Lovell first came to the University of Toledo, she never expected to be a leader. But that changed once she began her career as a member of the swimming and diving team.

As a freshman, Lovell just wanted to have fun and be part of the team. She was inspired to become a leader, however, thanks to the examples set by role models on the swimming team. Three years later, Lovell is not only a leader in the pool but is also president of the Student-Athlete Advisory Committee (SAAC), a very influential organization made up of representatives from every Rocket varsity sport.

“I never thought I’d be in this position,” said Lovell, who received bachelor’s degrees in English and in communication studies Saturday during an undergraduate spring commencement ceremony in Savage Arena.

“I am trying to be the kind of leader that I had when I first came here as a freshman, people like (former Rocket swimmer) Emma Sampson. I want people to feel welcome. I want them to do their best and to be proud of what they do, no matter what it is.”

Head Swimming and Diving Coach Brie Globig is impressed by Lovell, both as a leader on the team and in the UToledo student-athlete community.

“Each season Kennedy thinks of new ways to challenge herself to keep improving,” Globig said. “She is incredibly coachable and communicative. She is an incredible leader on the team. She is a great example of an athlete taking advantage of all collegiate athletics has to offer and making an impact during her years at Toledo.”Lovell is always supporting and pushing her teammates to be the best they can be, in and out of the pool. She said she particularly enjoyed mentoring the 11 freshmen that joined the team last fall. Lovell wanted to make sure that no one felt out and that everyone was included in group activities. 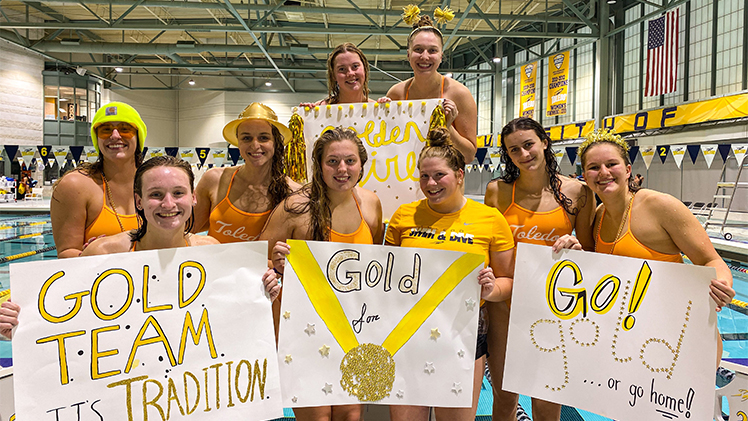 Kennedy Lovell (front row, far left) is a top freestyler on the women’s swimming and diving team as well as SAAC president.

Lovell takes the same approach in her role as president of SAAC. Her goal is to bring the UToledo student-athlete community together.

“My goal is to have us work together to make things better for ourselves,” Lovell said. “I want everyone to be together and be friends. We (student-athletes) are all going through the same thing.”

Lovell, who has been a part of SAAC for the past three years, became president of the organization in December. During her time on the committee, she has helped SAAC produce multiple campaigns to celebrate and support Toledo student-athletes, including social media campaigns that focused on student-athlete mental health, diversity, equity and inclusion in athletics. SAAC also hosted the recent Rocket Awards, a new event that celebrated student-athlete athletic success over the past year.

Lovell also represents UToledo on the Council of Student-Athletes for the Mid-American Conference, a group that comes together to discuss issues of common concern. She took part in the “Taking MACtion” conference in March, which focused on the topic of identity. Participants took part in round tables and discussions relating to mental health, diversity, equity, inclusion, and social/emotional leadership.

Lovell, who has one more year of athletic eligibility, will continue her educational journey at UToledo as she will enter graduate school this fall in pursuit of her master’s degree in English. It will be a new academic challenge for her but her focus on bringing people together remains the same.

“I’ve been through periods when I didn’t always feel accepted or welcomed,” Lovell said. “Growing up I sometimes felt like I was kind of on the outside, so that’s been something I’ve focused on, getting people to feel more accepted. My goal is always to make sure everyone feels included in things. I know I’m going to sleep better at night if I know people are taken care of.”