The announcement followed the conclusion of the 2022 Mid-American Conference Men’s Golf tournament on Sunday, May 1. 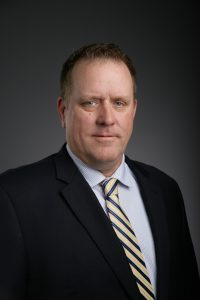 Toledo’s goal of winning the championship was in its sights that afternoon. Unfortunately for the Rockets, Kent State pulled away down the stretch to capture its sixth-consecutive conference title at the White Eagle Country Club.

“I appreciate the recognition from my peers,” Roope, the Rockets’ fifth-year head coach, said after learning about his award, “but we’re left with a bit of an empty feeling by not reaching our ultimate goal of winning the MAC title.

“I really appreciate the tremendous effort of the amazing young men on our team, because without that receiving this award wouldn’t have been possible.”

A trio of Rockets were named to the all-tournament team: sophomore Jamie Tofte Nielsen, who led the Rockets individually with a one-over 217 (72-76-69) thanks to a three-under par 69 that was the best round shot by any golfer that Sunday; sophomore Barend Botha (68-76-78) and senior Lukas Clark (74-77-71), who tied for fifth place at six-over par 222.