Growing up in Cuyahoga Falls, Tyler Ulbricht was only about 60 miles east of Cedar Point.

Spending summers at the amusement park, sometimes referred to as the Roller Coaster Capital of the World, was almost a rite of passage. But his time there, first as a customer and later as an employee, also ignited his years-long passion for roller coasters.

Ulbricht graduated from the College of Engineering Saturday with a bachelor’s degree in mechanical engineering.

During his years at The University of Toledo, Ulbricht said he is most proud of the projects that allowed him to apply classroom lessons including becoming a member of the Rocket Motorsports team.

“Each year, we design and build a racecar that then competes against other schools around the world,” he said. “Taking part in Rocket Motorsports has given me the chance to learn more skills beyond the classroom, such as manufacturing skills and Solidworks 3D CAD software.”

Ulbricht’s ability to take what he has learned in class and create something real led him to create his own roller coaster. He credits Dr. Brian Trease, assistant professor in Mechanical Engineering, with encouraging him to share the roller coaster he designed as a “pandemic project.”

“My roller coaster project began as a pandemic project that I worked on as I was isolated in my apartment,” Ulbricht said. “It grew from there, but I never thought anyone else would be very interested in it. Dr. Trease suggested I submit it to the Undergraduate Research Fair for fall 2021, where it was on display in Carlson Library during the last week of the Fall 2021 semester.”

Ulbricht and Trease share a love of roller coasters.

“When Tyler first let slip his passion for rollercoasters, I knew our conversations were about to get a lot more interesting,” Trease said. “Already among the pleasant office-hour regulars during my fall 2021 mechanisms course, Tyler, it turned out, also was among the group of committed devotees who attend limited behind-the-scenes events at Cedar Point, led by ride technicians during their wintertime maintenance season.”

After the pair geeked out about various aspects of rollercoaster engineering, Ulbricht showed his professor photos of his at-home roller coaster project. Trease was floored. 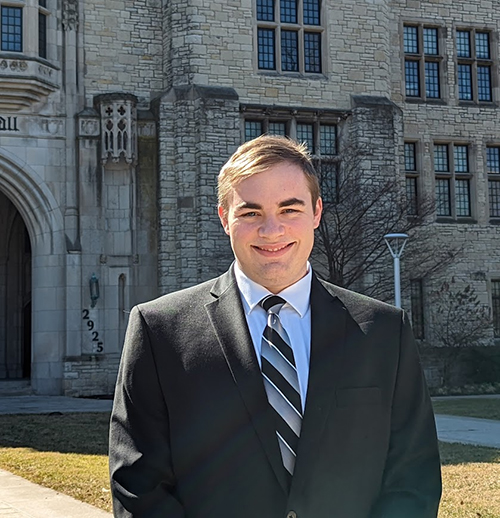 Having graduated Saturday with a bachelor’s degree in Mechanical Engineering, Tyler Ulbricht is ready to pursue his dream job: helping engineer safe and thrilling rides and roller coasters for amusement park fans.

“This was no off-the-shelf, by-the-manual construction; he had designed it with the same operating and safety principles used in real coaster parks,” he said.

Ulbricht had made multiple electrical and mechanical hacks to his system to get it running smoothly, adding sensors and 3D-printing custom parts as needed. He’d even integrated several “Arduino” microcomputer controllers, which are common components in mechatronics and robotics courses.

“Every time he updated me on his progress, my jaw dropped a bit more and I knew he had to get it out for the public to see,” Trease said. “Altogether, Tyler is a great model of how students can find a way to apply their studies to their passions to do something meaningful and engaging. Whenever a student finds that connection, the learning takes off on its own and I can barely keep up.”

“My roller coaster project took 13 months to build and went on through two semesters of classes and one co-op,” Ulbricht said. “I named it ‘Rocket Run’ as it ‘blasts off’ like a rocket. I was able to use the lessons I learned in class to help improve its functionality as time progressed, and the electronics within the ride thanks to the help of many friends who are more familiar with electrical circuits and Arduinos.”

Ulbricht posted a video on YouTube of Rocket Run in operation with an explanation of how it works.

“Roller coasters and amusement parks are my passion and always have been,” he said. “I have always been fascinated by how engineers use some of the fundamental principles of physics to create a safe and enjoyable experience. I enjoy how they give off the illusion of being a terrifying machine but are some of the safest forms of entertainment.

“My dream job is to help engineer safe and thrilling rides and roller coasters for amusement park fans to enjoy, and I’m working to make that happen.”