Outfielder Immersed Himself in All Aspects of Rocket Athletics

If you’ve been to a Toledo baseball game at any point over the last couple of years, you have probably noticed Nicky Winterstein, either on the diamond or cheering loudly from the dugout.

Or maybe you saw him in the middle of the student section at Savage Arena during a basketball game.

Or perhaps you’ve seen him cleaning up the arena after a volleyball match.

A senior outfielder on the baseball team who graduated Friday, May 6, with his master of business administration in leadership, Winterstein arrived at Toledo for the 2019-20 season as a graduate transfer from Francis Merion University in South Carolina. Since then, he has appeared in 83 games for the Rockets, hitting .303 with five home runs and 46 RBIs.

Off the field, Winterstein has been working with the Toledo Athletics’ facilities department as an intern and, when his schedule permits, donning Rocket Hawaiian shirts and yelling loudly from the student section at basketball games.

Winterstein’s work with the facilities department began shortly after his arrival on campus in fall 2019. He had already received his bachelor’s degree from Francis Marion in political science, and many of his MBA classes at Toledo were online. So, he needed something to fill out his schedule.

“I was going to take three classes a semester, so my workload was going to be much less than what I was used to,” Winterstein said. “I was going to have a lot of free time. So I reached out to (Associate AD for Operations/Events) Tim Warga and I’ve been working with them ever since.”

If you’re around early enough before a game, or stick around long enough after it’s over, you’ll see the facilities staff — typically, some of the first to arrive and the last to leave an event — cleaning and prepping Savage Arena or the Glass Bowl or Scott Park for the next event.

It was that type of work that attracted Winterstein in the first place. 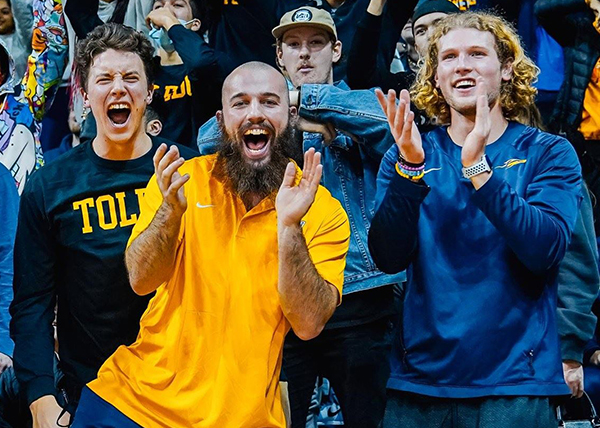 When his schedule permits, Nicky Winterstein (yellow shirt) has been donning Rocket Hawaiian shirts and yelling loudly from the student section at basketball games.

“I was looking for an opportunity to work in the athletic department and see some of the behind-the-scenes aspects,” Winterstein said. “Before working in college athletics, I had no idea how many people were involved in makings things run smoothly. It really takes a small army to get everything done. Being able to see the mechanisms of that has been really interesting.”

“It’s been a pleasure to work with Nicky over the past three years,” Warga said. “He brings a lot positive energy and dedication to our department — the same energy and dedication he brings to his academics and to his sport. There is no doubt in my mind that Nicky will be successful in whatever career path he chooses in the future.”

Since he linked up with the facilities department, Winterstein has worked with nearly every sport on campus at least once.

Being a kid from Blythewood, South Carolina, who did not know much about Ohio before coming to Toledo — “I knew it gets cold in the winter, I knew the Ohio State-Michigan rivalry, and of course I was aware of midweek MACtion football games” — Winterstein had some interesting experiences in his first year on the job.

“My first fall up here, we had a Tuesday football game in the first week of November,” Winterstein recalled. “And we came in on a Monday morning after having gotten five inches of snow the night before. So we spent the entire day shoveling snow in the bleachers at the Glass Bowl. Whatever snow we didn’t get to froze overnight, so then we spent all day Tuesday spreading salt and picking at ice to get the stadium ready for the game that night. It was my rude awakening to what a Midwest winter could be like.”

As much as he’s enjoyed working behind the scenes, Winterstein is also a passionate guy; sometimes he just needs to be front-and-center cheering on the Rockets.

“When our men’s basketball team played Ohio and Kent State I asked if I could go to the games as a fan instead of working,” Winterstein said. “Homecourt or homefield advantage makes a huge difference in the game. Those were huge games for us, so I wanted to be able to cheer on the team from the stands and help create an atmosphere and environment to help them win.”

It’s not just about cheering on his fellow student-athletes from the stands either. For Winterstein, whether someone at Toledo wears a basketball jersey or a swim cap, or whether they lace up cleats or carry golf clubs, they’re all Rockets and they’re all on the same team. 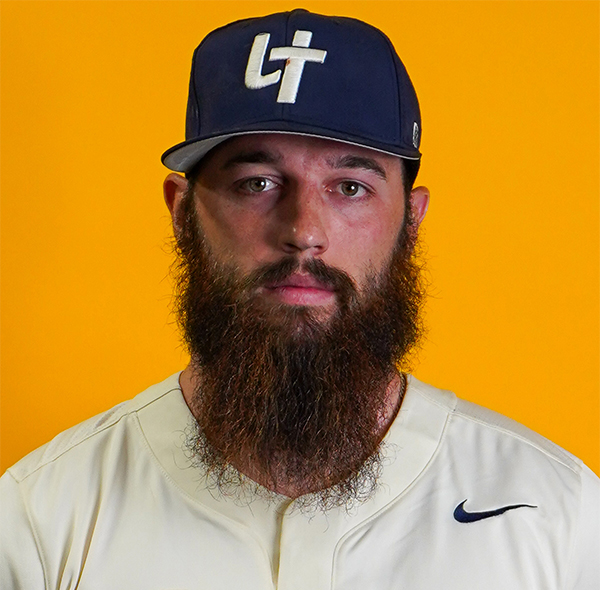 “I think it’s important to make connections and make friendships across sports,” Winterstein said. “Of course, I’m friends with all the guys on the baseball team, but now I have friends on every other team as well. Whether I see someone walking the halls at Savage or I see another someone walking on campus, knowing that we’re all student-athletes just like I am and we have that connection is cool. Even though we’re all different and we come from different backgrounds, having that similarity between us is the biggest thing for me.”

Rob Reinstetle, Toledo’s head baseball coach, appreciates that Winterstein has made the most of his time as a Rocket.

“Nicky is a super well-rounded individual,” Reinstetle said. “Ever since he arrived at Toledo, he has immersed himself in this University and the Athletic Department. He’s been a vital member of our baseball program and excelled in the classroom as well. But his contributions go much further than that. As a grad student, he also works for the facilities department, doing everything from A to Z for them. He is a regular at all athletic events and has turned himself into arguably one of the best Rocket fans we have on campus. He has an infectious smile and brings tremendous energy to everything he does.”

Winterstein’s top-fan status at this point may actually in inarguable; he was awarded the Bleed Blue Award at this year’s Rocket Awards ceremony as the top Rocket supporter among all student-athletes.

With his collegiate career winding down, Winterstein has his eyes set on the job market and, to nobody’s surprise, is looking at a career in college athletics.

“I didn’t really have any aspirations of working in college athletics prior to coming here,” Winterstein said. “But I’ve been applying for jobs across the country trying to get into athletics. This experience has opened my eyes to a whole different world I didn’t know existed, and I want to be a part of that.”

Winterstein received his M.B.A., but between the friends and memories he has made and the experiences he has accrued, he’ll be leaving with much more than that.

“I didn’t really know where Toledo would take me when I got here,” Winterstein said. “But I’m really glad it took me to where I am.”