Tennis Made Student-Athlete a ‘Better Person’

First impressions may be important, but Patricia Panta’s initial experience on the tennis court left something to be desired.

A native of Piura, Peru, Panta was 5 years old when she was introduced to tennis, but it took a long four years until she came to love the sport that helped her eventually grow into a Division I athlete.

Panta, who received a degree in communication studies from UToledo during Saturday’s spring Commencement ceremony, grew up in a neighborhood where she and her friends could easily go outside and play in the street, whether it was soccer, volleyball or any type of game. She did not have television or technology for entertainment. Instead, she did her homework after school and then went outside to play with her friends.

“Asking my mom for permission to let me go out and play in front of my home was one of my greatest joys,” she recalled.

On the other hand, Panta’s older brother, Brian, didn’t have the same opportunity to play with his friends because his life was already focused on tennis. Seeing her brother spending all of his free time playing tennis initially turned her off from the sport.

But when she was 9 years old, Brian, who was 11 at the time, traveled to Paraguay for the first time to play in a South American Tennis Tournament. The tournament featured the best three players from each South American country, with Brian representing Peru. Seeing her brother play as the No. 1 ranked player in Peru sparked something inside Patricia to give the sport another try.

“I remember I started to read the newspaper and instead of saying my brother’s name, I used to say my name,” Panta said.

Panta was inspired by her brother, who broke into the elite world of competitive tennis as someone from the middle-class.

“Brian has been an example of perseverance for me and never giving up,” Panta said. “His continuous effort was necessary for him to achieve the goals he set for himself. Despite the difficulties he encountered along the way and the doubts of others that he would achieve his goals, it was always important for him not to give up and never lose his will and hope.”

Panta and her brother have always had a good relationship and have gotten even closer recently despite living on different continents. They talk every couple of days and Brian always makes sure to call to check to see if his sister is doing well. “I have learned a lot from him, and I always look for solutions to overcome any obstacle,” Panta said.

Panta worked tirelessly to develop her game. She became the No. 1 ranked tennis player in Peru in her age group when she was 12 years old, and again at age 13, 14 and 15. 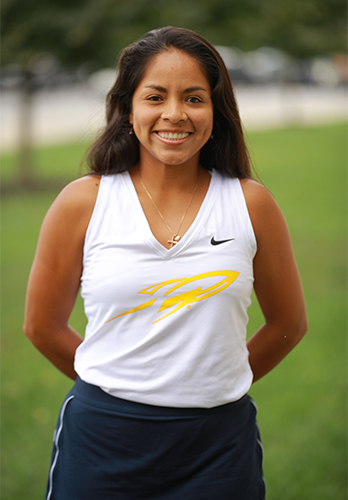 A native of Piura, Peru, Patricia Panta was 5 years old when she was introduced to tennis, but it took a long four years until she came to love the sport that helped her eventually grow into a Division I athlete.

One major obstacle she had to overcome, though, was an injury out of high school, which kept her from playing for a year just at the point where she was doing well on the court. To fill the boredom of not playing that year, Panta worked as a tennis coach with her dad and became certified Level 1 by the International Tennis Federation (ITF).

During her recovery, Panta tried playing juniors again, but it just wasn’t the same. The risk of another injury bothered her until she was completely healed. At this point in her career, playing college tennis in the U.S. was not on her radar.

“I never thought about coming to the United States to play college tennis,” Panta said. “I loved working with my dad — to the point that I just wanted to stay in Peru.”

However, Juliana Monroy, a close friend of Panta’s, helped her connect with Greg Owen, the head coach of Seward Community College in Liberal, Kansas. In 2017, Panta enrolled at Seward where she played No. 1 singles and doubles for two seasons. She was named a 2017 ITA All-American, a two-time Region IV singles and No. 1 doubles champion, and a 2018 ITA “Player to Watch.”

“I was impressed by the way she competed and carried herself on the court,” Mauntler said. “I brought her in on a visit to Toledo to meet the team and spend some time on campus before I offered her a spot on the team. It’s always important that recruits understand the culture and goals of the program, and I felt like Patty fit in perfectly.”

“Patty’s serve and forehand have really improved over the last few years,” Mauntler said. “She’s got a huge game for being such a peanut. She’s had some unbelievable wins for our program and was a big part of the nine-match MAC win streak that ended our 2021 season.”

Now that she has graduated and will begin her professional career off the court, Panta said that she will always remember the lessons she learned as a student-athlete.

“The best experience as a student-athlete is the joy on my teammates’ faces when we are playing for each other,” Panta said. “Tennis has made me a better person. It’s certainly helped define who I’ve become, and I love witnessing how the game impacts others in the same way.”