Sitting in a yellow excavator parked in front of a fenced-off Transportation Center, The University of Toledo President Gregory Postel carefully listened to an expert’s instructions about how to operate the heavy machine and tear into the empty building.

After some practice moving the excavator’s long and heavy bucket arm up and down and side to side, he knocked into the side of the building’s main entrance Tuesday morning with a slow and powerful upward thrust that caused bricks to crack and tumble to the ground as rubble. 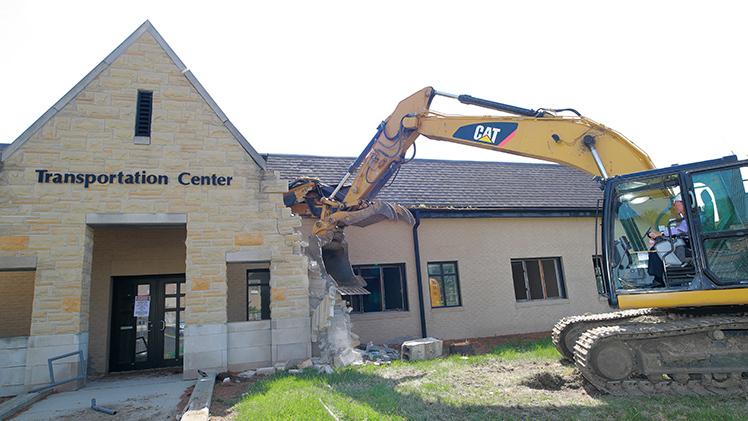 At the helm of an excavator, UToledo President Gregory Postel begins the demolition of the vacant Transportation Center on Tuesday morning. The demolition project should be completed by end of June.

About two minutes later, after some more destruction to that area, he smiled and gave the thumbs-up. The project was officially underway, with demolition activities on schedule to be completed by the end of June.

The demolition is aligned with the Multiple Campus Master Plan and follows the UToledo Police Department’s move to the new Public Safety Center.

“To me, this is a symbol of the campus rejuvenating itself, where we’re taking down old buildings and we’re going to be putting some new buildings up,” Postel said. “It’s just part of the life cycle of a healthy university.”

Built in 1959, the Transportation Center served as the main office building of the Lathrop Co. when it opened. In 1984, the building was home to the Central Services and Plant Operations, and approximately two years later, the police department moved in.

“The facility is one that was not purpose-built for the University, but we made it fit our needs over the years,” said Jason Toth, senior associate vice president for administration. “Removing the Transportation Center from campus is in line with the Facilities Master Plan, which calls for a reduction in square footage on our campuses.

“With the new joint-use Public Safety Facility fully operational, this gave us the ability to remove an underperforming building on the campus and create more green space.”

With Postel out of the excavator, the crew began to get to work.

Toth said knocking down the building should take about a week while the cleanup efforts will continue for a few additional weeks.