Simuic made the Indoor Track & Field All-American Team for her performance in the mile. She qualified for the NCAA Indoor Championships in Albuquerque, N.M., but she never got to compete as the meet was canceled due to the COVID-19 pandemic. 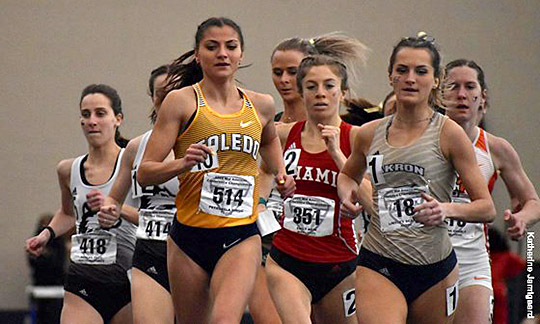 Petronela Simiuc is the Rockets’ first track and field All-American since Janelle Noe in 2018.

“This has been a long time coming for Petra to reach All-American status, and I’m so glad the USTFCCCA and the NCAA chose to recognize these athletes,” said Head Coach Andrea Grove-McDonough. “I look forward to watching her continue her career in her final outdoor season in 2021.”

Simiuc had a tremendous indoor season, breaking UToledo’s all-time record in the mile and 800 meters twice each. On Jan. 24, Simiuc clocked a time of 4:38.40 in the mile at the John Thomas Terrier Classic in Boston, smashing the previous record of 4:39.81 set by Megan Wright in 2014. She later broke her own record with a time of 4:34.59 to place fifth at the David Hemery Valentine Invitational Feb. 14 in Boston.

She closed out the regular season by breaking Toledo’s 800-meter record at Michigan’s Silverston Invitational Feb. 21 with a time of 2:08.23, surpassing the previous record of 2:09.20 held by Janelle Noe.

At the Mid-American Conference Indoor Championships, Simiuc re-broke the 800-meter record, posting a time of 2:07.46 in the final to place first.

On March 3, Simiuc was named the MAC Most Outstanding Female Track Performer.