Dr. Matt Foss, assistant professor of theatre with The University of Toledo Department of Theatre and Film, wrote and directed a play that was originally intended to be performed live and taken on the road to elementary schools.

However, due to the coronavirus pandemic shutting down performances, he translated the production to the online performance space and lesson plan to help learners at home. The play premiered online in April. 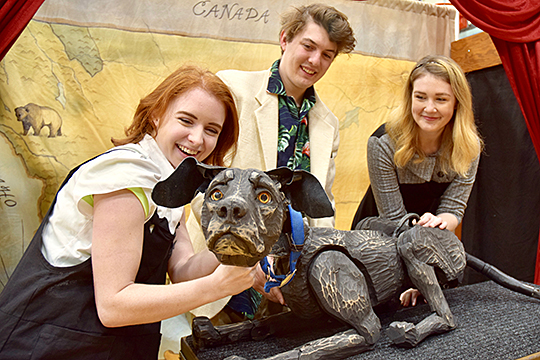 Cast members from “Faithful Friends” are, from left, Sarah West as Julia, Gabe Taurman as Valentine, Emily Hawkins as Silvia, and Crabbe.

Foss originally created the play, “Faithful Friends: An Adaptation of the ‘Two Gentlemen of Verona,’” in January and worked with the company’s staff and leadership to build the interactive modules and workshops that accompany it. The work was created for pre-kindergarten through sixth-grade students and to tour elementary schools. It was developed in partnership with Montana Shakespeare in the Parks, a theater he has worked with in the past, and its Montana Shakes! program, an elementary school outreach tour to make Shakespeare and other classic works accessible to young people.

“Working with Montana Shakespeare in the Parks was a foundational experience early in my career. They provide free and public art across the mountain west, and their mission relates closely to what I have found and seek to do here in Toledo” Foss said.

Four of Montana Shakespeare in the Parks’ teaching artists, who were safely quarantined together, filmed the play and created lesson plans through the interactive learning platform FlipGrid.

To convert the project to online, Foss enlisted the help of UToledo film student Jarrett Cunningham.

“I’ve been teaching myself to edit as fast as I can, but Jarrett was able to work remotely and close my learning and ability gap to help get the performance out to students and their families as quickly as possible,” Foss said.

The play and lessons are available on Montana Shakespeare in the Parks’ YouTube channel.