May 29, 2020 | Athletics, News, Business and Innovation
By Chris Cullum

Sophomore infielder Darryn Davis of The University of Toledo baseball team has been named Academic All-District by the College Sports Information Directors of America.

Davis will be on the ballot for Academic All-America, which will be announced next month. He is the eighth player in program history to earn Academic All-District honors and the first honoree since 2013. 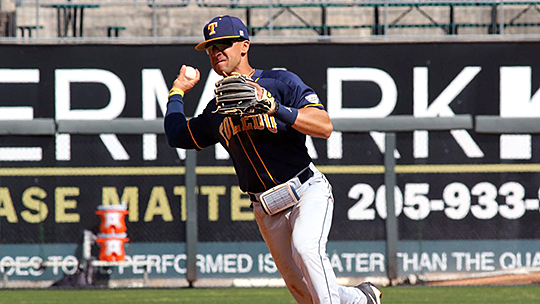 Sophomore Darryn Davis was named Academic All-District, putting him in contention for the Academic All-America squad.

The Ann Arbor, Mich., native was outstanding in the 16 games Toledo played this season. Davis hit .400 (24 for 60) and tallied a team-best 17 RBI. He ranked second in the Mid-American Conference in batting average and hits, as well as on-base percentage (.532).

Davis compiled a 20-game hitting streak dating back to the 2019 season, the longest by a Rocket since 2010. He served as Toledo’s leadoff hitter for most of the season, scoring a team-high 14 runs and walking 13 times while striking out in just six of his 77 plate appearances.

As a freshman in 2019, Davis hit .329 and started games at five different positions. He was second on the team with 19 multi-hit efforts while recording 12 extra-base hits and driving in 33 runs.

The 2020 Academic All-District Baseball Team, selected by the College Sports Information Directors of America, recognizes the nation’s top student-athletes for their combined performances on the field and in the classroom.