Dialogue Critical to Addressing Heart of Floyd Protests Across Country

Column written for and published in the June 3, 2020 edition of The Blade newspaper.

On Monday, May 25, George Floyd literally had his last breath squeezed from his body, akin to the lynching’s of thousands of African-American men and women in the American South up through the 1940s.

The killing of George Floyd and the aftermath make it difficult for me to separate my personal beliefs from my professional responsibilities as vice president of diversity and inclusion at The University of Toledo. 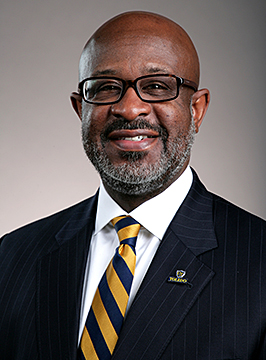 I am a professional African-American male who understands his privilege and responsibility to say something.

I will never again hear the words “I can’t breathe” without visualizing the image of the police officer’s knee deeply penetrating Mr. Floyd’s neck, and Mr. Floyd pleading for his life as he lies handcuffed on the ground.

In 2014, Eric Garner also died after a white police officer in New York held him in a choke hold that led to his death. He also cried out, “I can’t breathe.”

Now another unarmed African-American male has been killed at the hands of a white police officer.

To be clear, I believe the overwhelming majority of white police officers are good, law-abiding citizens who risk their lives each and every day to protect and serve our society. Like many of us, these brave men and women have families and loved ones, and at the end of their shifts, they want to go home safe and sound. I get it.

But what did George Floyd do to deserve his untimely and likely painful death? One could say his problem is that he was born male and black in America.

As an African-American male with three black sons, that is an awfully tough pill to swallow and feels too simplistic.

That pill is difficult, in part, because it means black men must bear the burden of surviving in ways men in other ethnic groups do not. It means that we must be mindful to double-dot our “i’s” and triple cross our “t’s” and know that our worth and contributions are scrutinized beyond that of our peers.

For many — not all — black men, women, and children, this is the reality.

That makes many black people, in particular our children, youths and young adults not OK. We are left asking ourselves, “What happened to being born with inalienable rights in our great country?”

While being born male and black in America may be part of the problem, I believe the larger problem is that we live in a society rooted in systemic racism that seemingly devalues the life of certain people — in this case, black men.

Let’s be honest, not all black men are perfect, and nor are all white men, or men from any ethnic group.

I am proud to work at an institution that is committed to the values of diversity, inclusion and equity, and stands in solidarity with those who mourn the tragic killing of George Floyd.

The University of Toledo in no way condones or supports violence of any type, but does support peaceful social protests.

As a member of our community, the University understands its responsibility to use its resources to help address societal issues such as racism.

We understand that it is our responsibility to teach our students important subjects such as American and Black History and the intersection of racism, race and class, and about privilege, diplomacy, respect for difference, and about social movements and protests through political science, sociology, anthropology, economics, education and many other disciplines.

Perhaps most importantly, we must care for our students, protect them, and include their voices in our work.

To address the killing of George Floyd and the larger issues of society, The University of Toledo will be hosting a series called “Dialogues on Diversity, Inclusion and Equity” composed of virtual town hall discussions designed to address a range of topics. The first in the series is scheduled from 5:30 to 7 p.m. Thursday, June 4, through Webex.

Dr. Willie McKether is vice president of diversity and inclusion, and vice provost, at The University of Toledo.