Helen McMaster, a local philanthropist who had a passion for helping others and was known for giving to The University of Toledo, died June 14 in Perrysburg. She was 103.

Known for her kind, generous nature, McMaster had the vision and the desire to provide funding to make others’ ideas come to fruition. 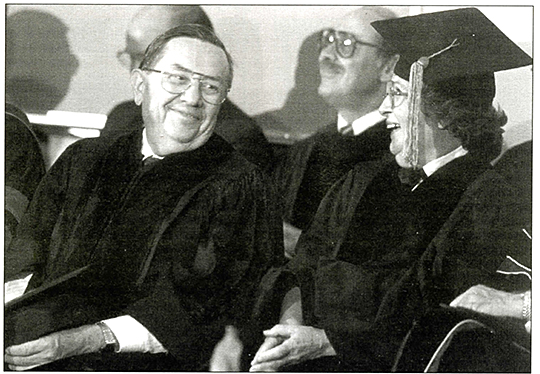 Harold and Helen McMaster received honorary degrees from The University of Toledo during the McMaster Hall dedication ceremony in 1987.

Harold A. McMaster, her husband of 66 years, died in 2003. He was an inventor who made a name for himself in the glass industry and solar energy field, and later shared his wealth with several area educational institutions.

The McMasters donated approximately $4.5 million to The University of Toledo.

The couple’s gift of $1.2 million in 1986 — combined with $7.9 million from the state — led to the construction of the physics and astronomy building that bears their name. The five-story building with more than 42,000 square feet for classrooms and research labs opened in 1987, and the McMasters received honorary degrees from the University during the dedication ceremony. Two years later, bronze busts of the two were unveiled in the lobby of McMaster Hall.

In 1989, the McMasters gave a $1.5 million gift to UT Corp. to help extend the University’s participation in solar energy research with Solar Cells Inc. For years, UToledo researchers worked with the company, now known as First Solar LLC, and received funding from the U.S. Department of Energy.

Tributes are suggested to the Parkinson’s Disease and Movement Disorder Program, account number 2600275, through The University of Toledo Foundation.