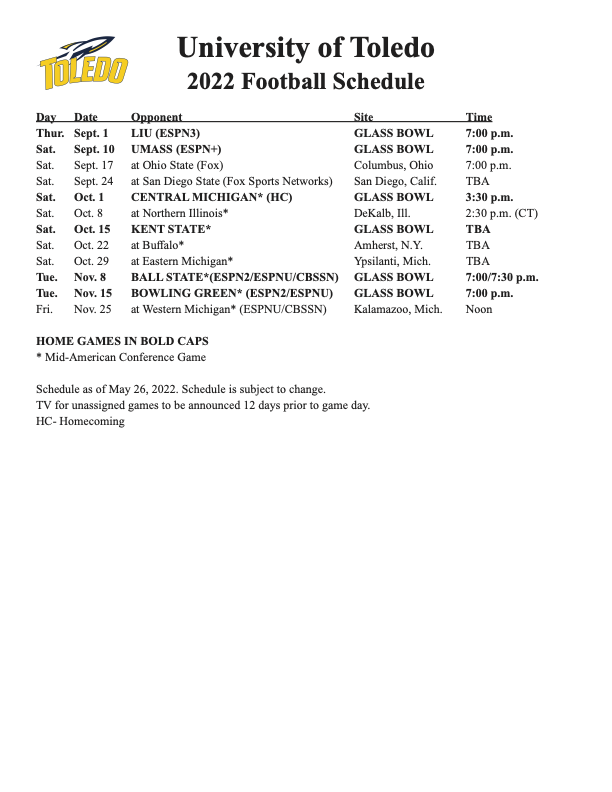 The Rockets’ game at Ohio State in Columbus on Saturday, Sept. 17, will be televised nationally on Fox with a 7 p.m. kickoff.

Game time for the Kent State game on Saturday, Oct. 15, has not been set, while the final two home games on the schedule will be played on Tuesday nights in November. The Ball State game on Nov. 8, will kick off at 7 or 7:30 p.m. (TV TBA), while the Battle of I-75 game vs. Bowling Green on Nov. 15 will begin at 7 p.m. on either ESPN2 or ESPNU.

Kickoff time also has been set for Toledo’s game at Northern Illinois on Saturday, Oct. 8. The Rockets and Huskies will battle at 2:30 p.m. CT (3:30 ET) with the TV assignment still undetermined.

Game times and TV assignments for the remainder of the schedule will be announced within the 12-day window prior to game day.

Football season ticket members, Rocket Fund contributors and Athletic donors have exclusive access to order tickets for the Ohio State game in Columbus on Sept. 17. To order Ohio State tickets, go online to the UTRockets.com/OSUtix webpage, call or text the Rocket Ticket Office at 419-530-GOLD (4653) or stop by the Rocket Athletic Ticket Office at Savage Arena during office hours.