Student-Athlete Appointed to Board of Trustees

A student-athlete has been appointed to represent students on The University of Toledo Board of Trustees.

Madeline Vining, a junior studying economics and political science and a member of the women’s cross-country and track and field teams, was named by Gov. Mike DeWine to a term beginning July 2 and ending July 1, 2024. 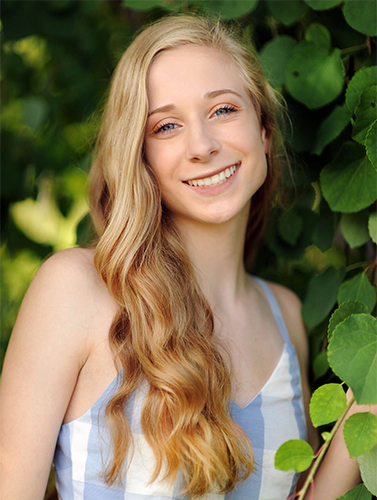 Madeline Vining is a junior studying economics and political science and a member of the women’s cross-country and track and field teams.

Vining said she has been a Rocket since she was a child living in a neighborhood near campus and regularly walking to basketball games in Savage Arena and wanting to be a UToledo student when she grew up.

“As a lifelong Toledoan that has lived across the street from the University, I am committed to serving the University and making it the best it can be,” she said. “I would take this experience with me throughout my life as I try to enhance the public good for everyone in our community.”

In addition to her commitment as a student-athlete, Vining is active on campus as a senator on Student Government and served on the search committee for the vice president for intercollegiate athletics and director of athletics.

“Student government has given me so many opportunities this year to grow as a person and make new connections,” Vining said. “I have been able to meet so many new people outside of athletics and learn from their experiences. I have also been able to bring the opinion of athletes to student government, so all sides of campus feel represented. I also think my time has helped me learn how to run projects and help voice the concerns of the campus.”

Vining thanked her coach, Andrea Grove-McDonough, director of cross country and track and field, and Nick Stenuf, associate head coach, for their support and for teaching her “how to do my very best and make sure I know I can only fail if I do not try.”

“I would not be the person I am or have gotten this position without Andrea’s and Nick’s constant support, and I hope for years to come they can keep helping young adults like me learn how to be someone at UToledo,” she said.

Vining works as a small claims law clerk at Toledo Municipal Court and is spending the summer at an internship with the Ohio Secretary of State. After graduation she intends to go to law school and enter a career as a prosecutor.

“One of the reasons I wanted the role was to give back to Toledo the way Toledo has changed my life in the short past three years,” Vining said. “I wanted to be the best voice for all students and make sure everyone feels valued on the campus. I look forward to all the new connections and people I will meet along the way.”