A growing crisis known as period poverty affects millions of women, teenagers and girls worldwide who do not have access to menstrual hygiene products such as tampons and sanitary pads, but many are unaware of the problem.

“Even as a female, I took it for granted and it was something I was not very aware about and didn’t overly consider until just recently,” said Emily Warner, 25, a second-year medical student. “Then I read in my research that a significant percentage of women and teenagers in the United States have to miss work and school because they don’t have period supplies. That doesn’t only affect their ability to keep a job or do well in school but also affects their mental health and physical health if you don’t have proper hygiene. 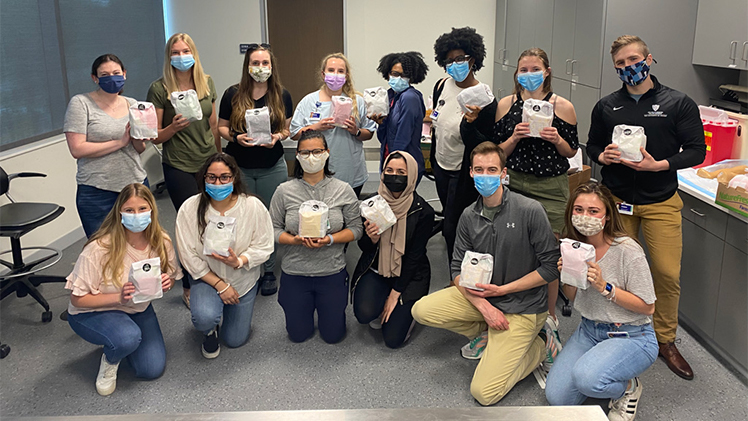 Led by a pair of second-year medical students, a group of UToledo students joined together to fight period poverty in Toledo by assembling and donating kits with menstrual hygiene products.

“After finding out how big a deal it is, it became a big deal to me because I feel like I had been taking it for granted.”

At the same time, Madison Feeley, 22, also a second-year medical student, was working to combat the problem.

Rather than working separately to address period poverty, however, Warner and Feeley realized that they could do so much more together.

Joined with other volunteers from groups around The University of Toledo campus, the pair helped launch a menstrual hygiene product drive in early March, with drop boxes set up around campus for donations of tampons, sanitary pads and panty liners. Later, online purchases of the products could be made and sent directly to the group.

Within a few weeks, a group of 30 volunteers was assembling 200-plus individual kits, each containing eight tampons, eight pads and four panty liners, as well as shampoo and conditioner and single-use wipes.

The kits, costing approximately $8 each, were made and distributed to CommunityCare Clinics, a student-run organization that provides free medical care to those with limited or no health insurance. The next set of kits were donated to the Toledo Labre Project, which provides food and necessities to the underserved and homeless in Toledo.

The menstrual hygiene product drive donated hundreds of kits and raised $1,000 to purchase products. And after some recent local media coverage, a local donor purchased 66 boxes of tampons, pads and other supplies, which allowed them to make a couple hundred more kits.

“It was absolutely incredible,” Warner said. “I was so overcome by the generosity of people in our community that it almost brought me to tears.”

Given both the success of the menstrual hygiene product drives and the need for the products, Warner and Feeley said they are looking for ways to reach further in the community, including making kits available to local middle and high school students.

“We’re definitely making a difference,” Warner said. “Just seeing people’s faces when they find out we have these items available for them and how thankful they are to have these menstrual hygiene kits, it really does show there’s a need for it.”

The group will be meeting throughout the summer when they can to build the kits. For those looking to help, email endperiodpovertytoledo@gmail.com for more information.

Or, to make a donation, visit their Amazon Wishlist.