UToledo Provost Elected to AURA Board of Directors

Dr. Karen Bjorkman, provost and executive vice president for academic affairs at The University of Toledo, was elected to the Association of Universities for Research in Astronomy Board of Directors for a three-year term, beginning July 1, 2021, through June 30, 2024. 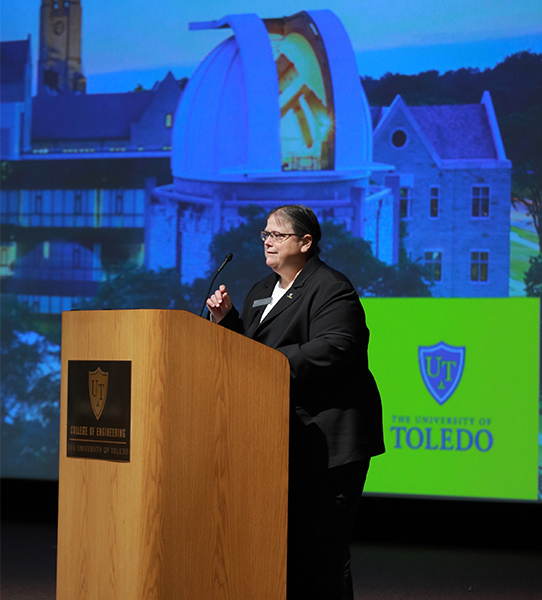 Dr. Karen Bjorkman, provost and executive vice president for academic affairs at The University of Toledo, joins the Association of Universities for Research in Astronomy Board of Directors for a three-year term, beginning July 1.

Founded in 1957 and based in Washington, D.C., the Association of Universities for Research in Astronomy (AURA) is responsible for the successful management and operation of its three major astronomical science centers: the National Science Foundation’s National Optical-Infrared Astronomy Research Laboratory, the National Solar Observatory and the Space Telescope Science Institute.

Today it has 47 member institutions in the U.S. – including UToledo, which was voted in as a member in 2016 – and three international affiliates.

“I am honored to have been elected to the AURA Board of Directors,” Bjorkman said, “and look forward to working with the other directors in helping to advise AURA about future directions for U.S. astronomy.

“This is an exciting time in astronomy, especially with the forthcoming launch of the James Webb Space Telescope into space later this year; the first observations from the Vera C. Rubin Observatory (formerly LSST) in Chile, with its large survey telescope, scheduled for 2023; and the new Daniel K. Inouye Solar Telescope now in operation on Maui in Hawaii. I look forward to UToledo being involved with these and other projects that AURA manages on behalf of NASA and the NSF, respectively.”

Matt Mountain, president of AURA, welcomed Bjorkman’s election to the board.

“Dr. Bjorkman’s commitment to science outcomes, public outreach and her demonstrated leadership were key factors in her election to our Board,” Mountain said. “We are looking forward to working with Dr. Bjorkman as AURA, its staff and university members look forward to exciting years ahead for astronomy and astrophysics.”

Visit AURA’s website to learn more about the prestigious association that includes many of the top astronomy programs in the nation.