Algae scientists and student researchers aboard The University of Toledo research vessel are taking measurements and collecting water samples on the Maumee River in Toledo after a harmful algal bloom popped up downtown.

“This week has become a five-alarm fire for our research,” Dr. Thomas Bridgeman, director of the UToledo Lake Erie Center and ecology professor, said. “We are working to figure out what may have caused this sudden river bloom.” 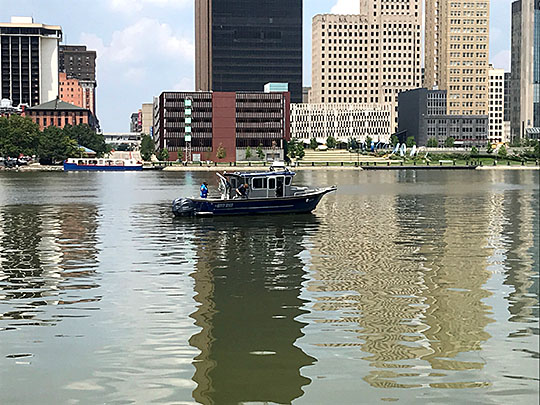 Algae scientists and student researchers aboard The University of Toledo research vessel took measurements and collected water samples on the Maumee River in Toledo. The crew was dispatched July 8 after a harmful algal bloom appeared downtown.

Bridgeman has monitored, tracked and studied algae in the Great Lakes for nearly two decades. He created a new method to measure how much harmful algae there is in the lake during the course of a summer and has compared the bloom from one year to another since 2002.

“The bloom appears to be growing in the river, not blown in from Lake Erie,” said Zach Swan, UToledo graduate student working on a master’s degree in ecology. “The recent high temperatures we’ve had have contributed to the growth of this bloom, and we could see it continue to grow if these conditions continue.” 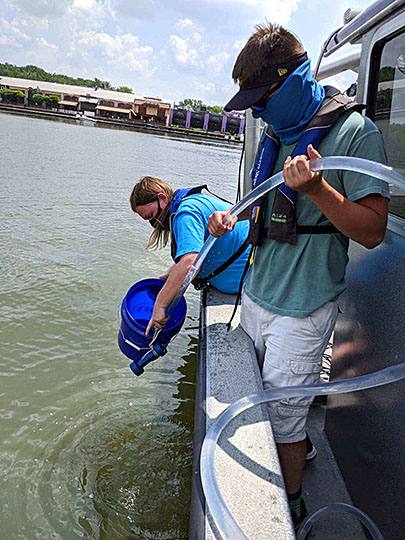 UToledo students collected a water sample on the Maumee River.

“Dry conditions have resulted in very low river flow and, in addition, high lake water levels cause the river to slow down even further,” Bridgeman said. “Essentially, the lower stretch of the Maumee River has become a large pond. Anytime nutrient-rich water sits still and becomes warm, there’s an enhanced risk of a bloom. Although the bloom is visible at the surface, we’re especially interested in the conditions near the river bottom, where chemical changes can take place that can accelerate a bloom.”

The crews focused their efforts Wednesday on areas downtown by Promenade Park, the National Museum of the Great Lakes and near the Port of Toledo.

“Whenever cyanobacteria is visible in the water as a surface layer or scum, toxin levels in that layer are likely to exceed the recommendations for recreational contact,” Bridgeman said. “Pets and small children who may be at risk of ingesting water especially should be kept away from areas with visible surface scums of cyanobacteria.”