An alumnus of The University of Toledo will try to pass one of the most dangerous job interviews during Shark Week.

Randy Thomas, who graduated in 2019 with a bachelor’s degree in environmental sciences, will compete on Discovery’s first Shark Week series, “Shark Academy.” The series premieres Sunday, July 11, streaming on discovery+, and airs at 10 p.m. Sunday, July 18, on Discovery Channel. 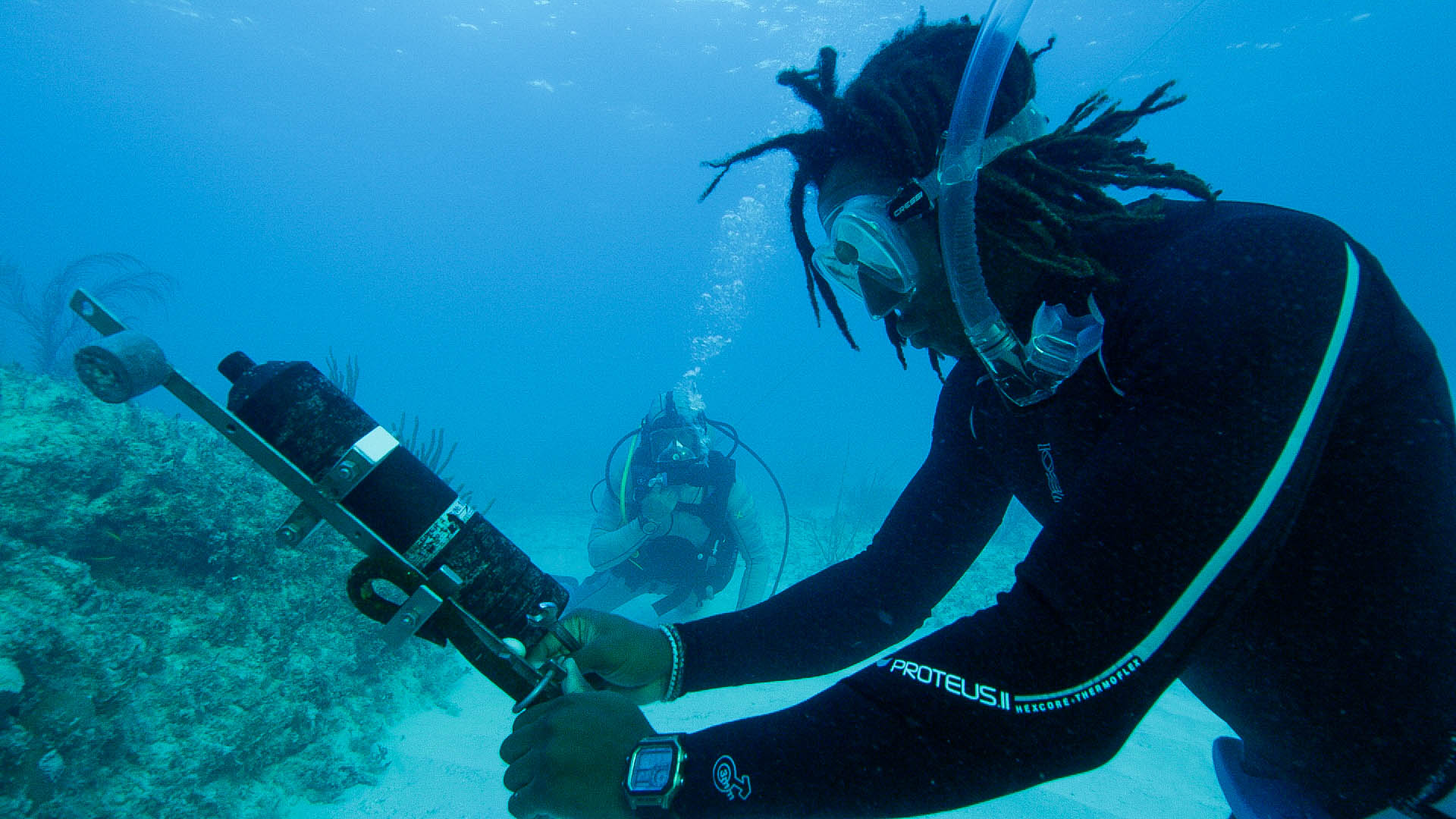 Randy Thomas free dives to recover crucial scientific equipment, while Dr. Riley Elliott keeps a close eye. Thomas graduated UToledo in 2019 with a bachelor’s degree in environmental sciences. Photo courtesy of Discovery and is for press use only.

“Sharks were my first love as a kid,” said Thomas, who grew up in Detroit. “College led me to believe I can do anything, and the chance to actively work with and research one of the world’s most fascinating predators is a once-in-a-lifetime opportunity.”

The new television series follows eight men and women on an intense six-week crash course to secure a crew spot on shark scientist Dr. Riley Elliott’s next great shark diving expedition. The recruits work and live together on a research vessel for six weeks.

“This is no vacation,” Elliott said.

With a passion for animals and an enthusiasm for fellowship and community, Thomas has made the most of every opportunity that has come his way and never let himself believe he would fail.

Thomas is an alumnus of UToledo’s Multicultural Emerging Scholars Program, which is designed to help first-year students make the academic, social and cultural transition from high school to college and inspire achievement in college-level courses.

“I had goals of playing football that were outmatched by my undeniable passion for animals, which led me to major in environmental science and bridge the gap between wildlife and humanity through wildlife education, adventure and outreach,” Thomas said.

Dr. Jeanine Refsnider, associate professor in the UToledo Department of Environmental Sciences in the College of Natural Sciences and Mathematics, noted that being on-the-job and out of the research lab presents its own challenges.

“Fieldwork can be really hard, and often involves long hours in hot, cold, wet and/or buggy conditions,” said Refsnider said. “Randy is a really hard worker and absolutely loves being in the field studying animals. He will be the first one out in the morning and last one back in the evening. He loves every minute of it no matter how unpleasant the weather.” 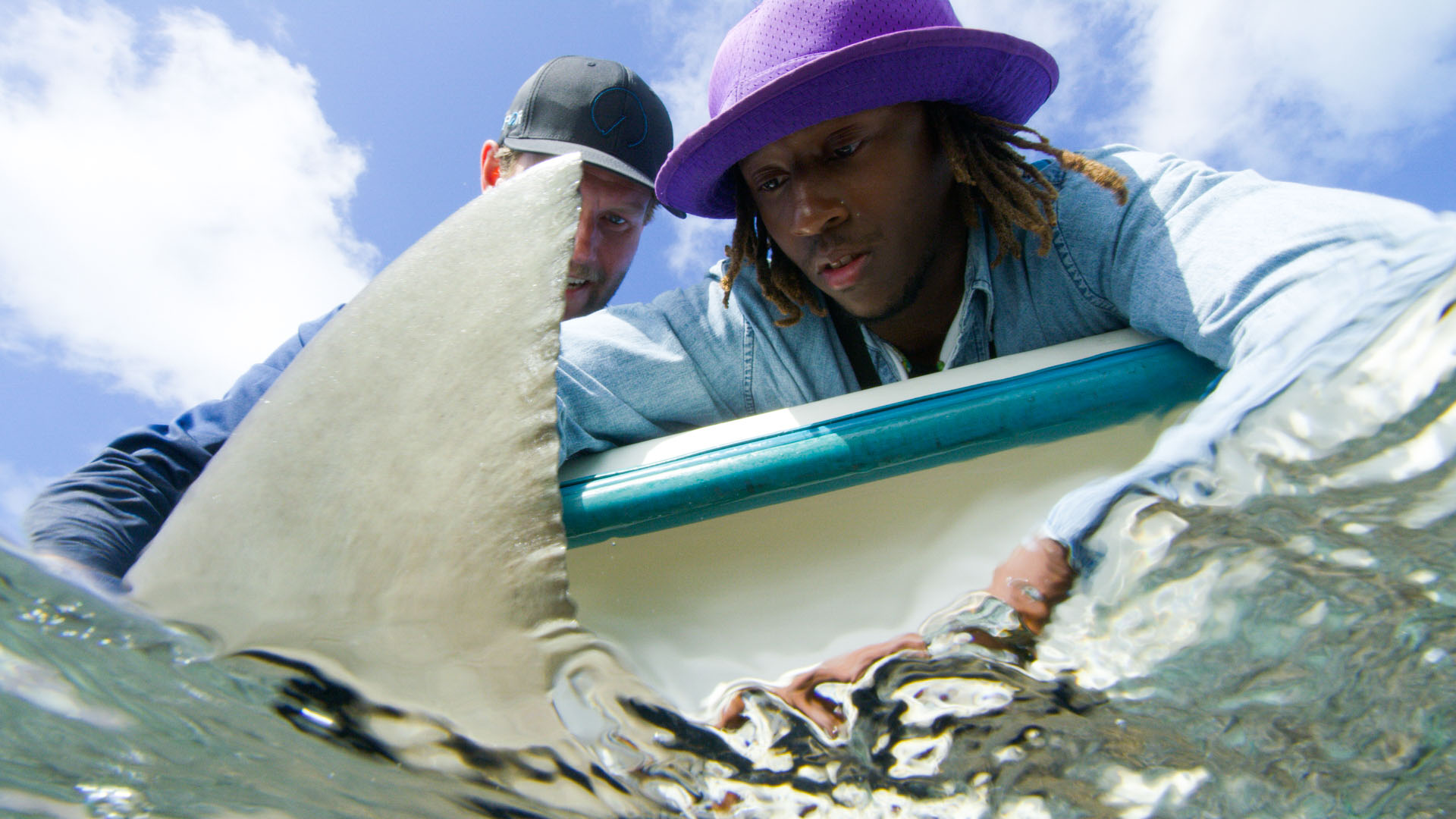 Dr. Riley Elliott helps Randy Thomas work up a bull shark. Thomas grew up in Detroit and said sharks were his first love as a kid. Photo courtesy of Discovery and is for press use only.

After earning his degree at UToledo, Thomas’ work took him around the world.

He then worked for the U.S. Department of Defense in Bahrain as a child youth program coordinator and later moved to Key West, Fla., to serve as a marine science educator with the Pigeon Key Foundation.

It was in Florida, Thomas said, that he spotted an open casting call from a production company that had worked on reputable animal shows, put together an audition video and submitted it.

“Even though it’s a competition where we worked both as teams and individually, the show is incredibly scientific and educational. I think that’s what viewers will see,” he said. “Each week was progressively harder and more strenuous in the research and the competition.”

“Shark Academy” is produced for Discovery by Double Act.