A University of Toledo music alumnus’ band, Inner Circle Avenue, has signed a partnership contract with Sony Music and AMG.

The band is composed of Logan Alexander, who earned a master of music in performance degree this past spring, and his siblings, Allison and Eric Alexander, who are UToledo students. Eric is a junior majoring in electrical engineering tech, and Allison is a senior who will graduate with a nursing degree in December. 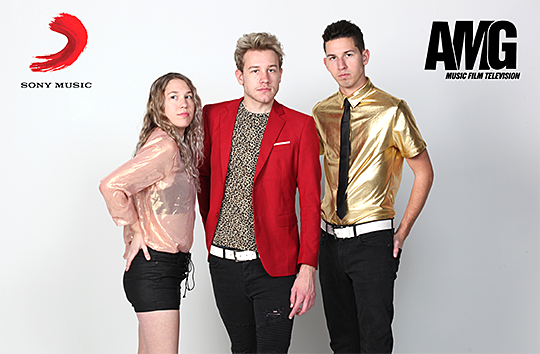 Logan credits his time at the University as playing a significant role in his success. His undergraduate degree was in electrical engineering. He wanted to understand the fundamentals and technology behind recorded music. For his master’s degree, he chose a music degree, which also included a concentration in music technology.

“My professors were Wade Paul, Dr. [David] Jex and Dr. [Lee] Heritage. They always made the classes exciting and encouraged students to actively participate in unique ways. I really found that teaching style enjoyable and helpful,” Logan said, adding his classes directly impacted his music. “I really loved music theory and the classical music influence. It really helped improve my music writing skills in every way.”

As a graduate assistant, Logan also had the chance to teach, an experience he thoroughly enjoyed. “I loved the whole process of teaching and working with students. I really liked being able to help other people learn. I think I made it fun. I didn’t just drone on and on.”

Inner Circle Avenue’s sibling members hail from Blissfield, Mich. They have been performing together for the past five years, playing many local and regional clubs, including Frankie’s, the Ottawa Tavern and the Distillery. Two years ago, they won the Next2Rock local Battle of the Bands through Cumulus Media and Bar 145.

The group also has been heavily self-promoting their music on Spotify and many other social media outlets. Their efforts and the quality of their work caught the attention of AMG Executive Vice President Michael Usry.

Logan said, “We got a call out of the blue late last December. Michael from AMG said, ‘We really love your music and want to work with you.’”

The partnership was to include promotion and distribution of the group’s music, as well as a college concert tour and a tour in Asia.

“We knew this was really something big. We decided to sign with them because we wanted to maintain the rights to our music and this contract lets us do that,” Logan said.

Unfortunately, the COVID-19 pandemic has delayed the band’s plans for touring, but the siblings remain determined to record and distribute their music.

Logan noted that an important dynamic of Inner Circle Avenue is the band members’ commitment to hard work and their stout refusal to give up. “I have seen so many bands that showed such great promise, genius even, on the brink of success and give up because of a setback or two. We’re not like that. We’re going to push through and make it happen.”

Visit Inner Circle Avenue’s website to learn more and listen to their music on Spotify.