As a marketing and communication professional with more than 25 years of experience, Pierrette Dagg was confident in her writing skills.

It wasn’t long into her Ph.D. program in Foundations of Education that Dagg was given first assignment that would test her strength. 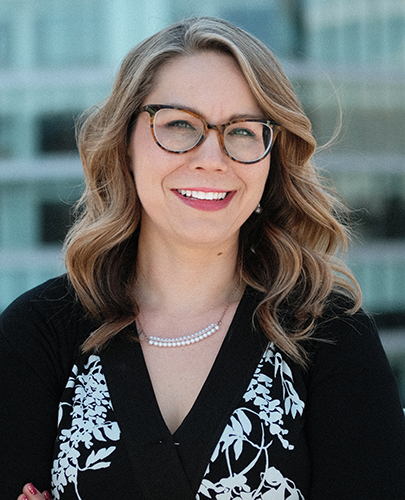 Each student in her cohort was provided an essay assignment with what they thought was an easy prompt. She then submitted what she thought was her best work — an essay that would be graded by four professors in the program.

“I had never seen so much red and writing on the margin,” Dagg said. “One professor ran out of room and attached another piece of paper because there were so many comments and things to improve. I think that was the worst grade I’ve ever gotten on anything in my entire life.

“It was just hard enough that it almost broke me, but it showed me that I can do this — I just needed improvement. It was probably the most humbling moment of my life.”

Three years later as she nears the end of her program, Dagg’s confidence in her academic skills has risen even higher than her pre-Ph.D. levels.

This was something that she expected, as the quality of education at UToledo was the reason she chose it not once, but twice.

Originally from Dayton, Dagg completed her bachelor’s degree in 2014 and an executive MBA in 2018 at UToledo.

In addition to her work as a student, Dagg is the director of communications for Merit Network, the first and longest-running research and education network in the U.S. that focuses on information and technology equity and broadening internet access.

Through her position at Merit Network, Dagg discovered an interest in combining social justice and technology, which fueled her decision to work towards a Ph.D. in Foundations of Education with a minor in educational technology from the Judith Herb College of Education.

Merit Network, which is governed by all 12 public universities in Michigan, also provides resources and data for local and state governments to effectively decide how to improve internet access rates in their communities.

“Higher broadband access increases home values, decreases incidences of violent crime and increases democratic and civic participation,” Dagg said. “Students who have home internet access do better on standardized tests, score on average half a letter grade better and have more intention of going to college and pursuing a STEAM career.”

She has grown her research through collaborations with UToledo faculty, including publications about the perceptions and realities of online learning and proposals focused on the ethics of using artificial intelligence (AI) in education. Dagg also presented with Dr. Edward Janak, professor and department chair in the Department of Educational Studies, at the Popular Culture Association conference about popular culture representation of AI in schooling and how that represents how society feels about technology.

In addition, they have a co-authored chapter in press that examines how current perceptions of gender roles impact the development of AI in education, and how this has been portrayed in popular culture.

“I have encouraged teachers to think ethically about using technology in their classrooms and not just practically for years,” said Janak. “Working with Pierrette really pushes my thinking in new directions and has encouraged me to develop a new line of inquiry in partnership with her.

“I highly value the depth of her thought and how she is able to bridge her academic and professional worlds so successfully in our program and am grateful we have been able to provide an academic home for her work.”

Dagg encourages students to be focused on their goals but not with so much tunnel vision that they pass by other opportunities for growth.

“Don’t box yourself in with what you want to do,” Dagg said. “Enjoy the experience and take time to be mindful and present.”

After she graduates in December 2023, Dagg said she plans to become an educator in some capacity and continue advancing her research.

“I started school in 2011 and I haven’t stopped, not even taking the summers off. Here I am, almost right at the end of this and I think about the person I came in as,” Dagg said. “Your thought patterns, how you operate strategically, your goals as a person and your general well-roundedness changes.

“Throughout the entire course of three degrees, you end up an entirely different person and I’m doing things today that I never thought I would do.”