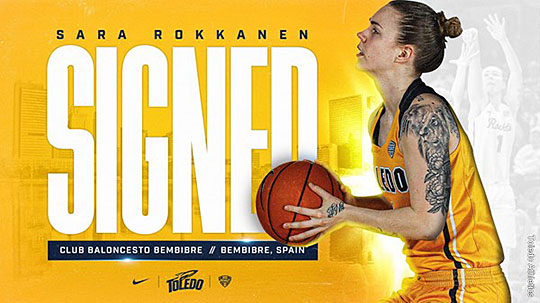 In addition, former Rockets Kaayla McIntyre, Janelle Reed-Lewis, Dortch and Harris currently play for the Toledo Threat, which is part of the women’s professional basketball organization.

“We are all thrilled for Sara as her dream of becoming a professional basketball player becomes a reality,” Cullop said. “We look forward to cheering her on as she begins the next chapter of her career.”

Rokkanen played her best basketball as a Rocket during the 2020 MAC Tournament, contributing 12.0 points and 5.0 rebounds in 35.5 minutes. She scored in double figures in both post-season contests and shot an impressive 47.1% (8 of 17) from the field, helping Toledo advance to the tourney semifinals.

For the season, Rokkanen finished third on the squad in three-point field-goals made (30) and fourth in three-point field-goal percentage (.309, 30 of 97, minimum 25 attempts). The Helsinki, Finland, native knocked down at least two shots from beyond the arc on eight occasions in 2019-20, including a season-high three against archrival Bowling Green Jan. 18.

During her four seasons as a Rocket, Rokkanen scored in double figures on 16 occasions, including a career-best 15 points against the Falcons. A three-point specialist, she also drained at least three triples on 12 occasions at Toledo, including a collegiate-best four five times.