“We looked at four different species and found four different results,” said Dr. Jeanine Refsnider, an associate professor of environmental sciences at The University of Toledo. “Although we are making substantial inroads toward understanding how microcystin affects human health, less is known about effects of microcystin on wildlife exposed to harmful algal blooms.” 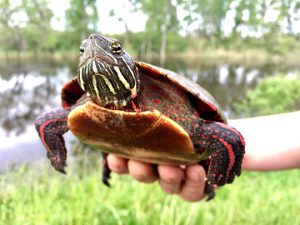 This painted turtle from the Ottawa National Wildlife Refuge in Oak Harbor, Ohio, was trapped and released by Refsnider and her assistants after they took measurements to assess the effects of algal blooms on the reptile.

The UToledo research published in the journal Science of the Total Environment finds that physiological stress levels were higher in songbirds and snakes, and immune function was higher in snakes but lower in turtles, impacting their ability to fight off pathogens.

“While harmful algal blooms aren’t directly causing exposed wildlife to die, the research suggests they are causing reptiles and birds to have generally worse health, putting their system at a disadvantage,” Refsnider said. “The reptiles and birds are ramping up their response which can be harmful if you have a constantly elevated stress level in your body.

“In humans, if you have chronically high stress, you have distressed immune system. The indirect effects that stress has on other functions can be negative, such as lower reproductive output and population decline.”

The wildlife included in the study are barn swallows, red-winged blackbirds, Northern watersnakes and painted turtles.

Brittany Holliker, who graduated from UToledo in May 2020 with a bachelor’s degree in biology, worked in the lab staining blood from watersnakes and tadpoles and analyzed them with a microscope to identify and record numbers of white blood cells. 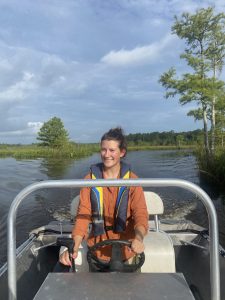 Brittany Holliker, who graduated from UToledo in May 2020, worked in the Refsnider lab staining blood from watersnakes and tadpoles and analyzed them with a microscope to identify and record numbers of white blood cells.

“It is incredible that my undergraduate research is now part of a published study that can be used for wildlife conservation,” said Holliker, who worked as an avian field technician in Mississippi after graduating from UToledo and is moving to Kansas to be a scaled quail field technician. “My experience at UT definitely helped me launch my career in wildlife biology by giving me the opportunity to become involved in interesting scientific research and by giving me knowledgeable professors who helped prepare me for the science field.”

While the study found that turtles had weaker immune systems, snakes in the algal bloom site had stronger immune systems and birds showed no difference in immune function.

“Snakes are putting more energy into their immune system to fight off infection, but the extra immune energy has to come from somewhere else — maybe they’re skinnier or maybe not reproducing quite as much,” Refsnider said. “If they’re increasing immune functioning to deal with the harmful algal bloom, that comes at a cost to something we haven’t identified yet.”

After identifying the inconsistent response of wildlife to harmful algal blooms, Refnsider next wants to track the movements of the animals through satellite or acoustic transmitters to see if they are changing their travel patterns to avoid experiencing the negative impacts.