Toledo Football Head Coach Jason Candle said that while he and his team are disappointed they will not be playing football this fall, he understands the decision and will help the Rockets focus on training and preparing for a football season next spring.

On Aug. 8, the Mid-American Conference announced the postponement of all fall sports until next spring due to continuing concerns related to the COVID-19 pandemic. 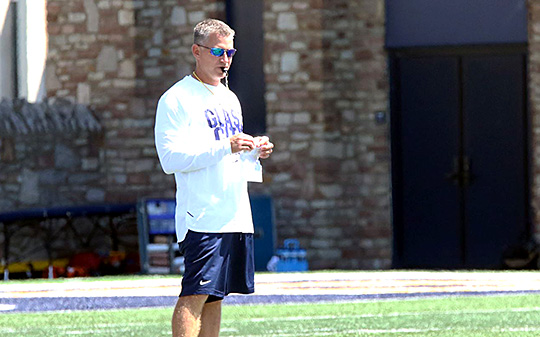 “I think what we’re all striving for is to try to find an environment for our guys that is as safe as possible and will allow them to do what they love to do,” Candle told a gathering of reporters Monday morning. “We always try to learn from the past, produce in the present as much as we can, and prepare for the future. We have had four months of dealing with the past and learning what this virus has done. The present has changed quite a bit obviously with no football this fall. The one thing we do know is there will be football in the future, and we know we have to be ready for that.”

After missing all last season due to a knee injury, senior offensive lineman Bryce Harris said he and his teammates are prepared to wait a little longer for their return to the gridiron.

“I told my offensive group that this is an opportunity for us to grow,” Harris said. “We want to play, and we want to be on the field, but we have to look at this time off as a time to get better.”

After hearing the disappointing news on Saturday, Candle said many of his players went right back to work.

“When I left here on Saturday after telling them the news, there were 20 guys down on the field working out,” Candle said. “That’s who they are and that’s who they will continue to be.”

MAC Commissioner Jon Steinbrecher said in his news conference Saturday that details regarding the plans to move fall sports schedules to the spring will be announced at a later date.