In a few weeks David Baliu-Rodriguez will be expanding his horizons, personally and professionally, as he moves to the eastern edge of the San Francisco Bay Area.

The 32-year-old UToledo student is graduating with a Ph.D. in chemistry, and on Aug. 30 will join Lawrence Livermore National Laboratory, (LLNL) in Livermore, Calif., as a postdoctoral researcher. 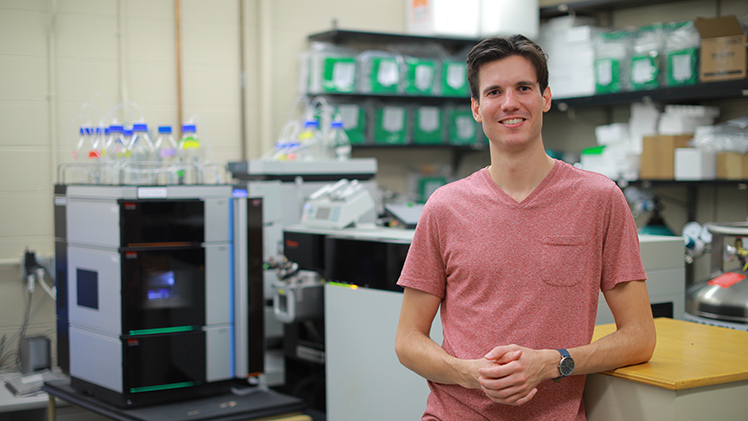 David Baliu-Rodriguez is graduating with a Ph.D. in chemistry, and on Aug. 30 will join Lawrence Livermore National Laboratory in Livermore, Calif., as a postdoctoral researcher.

“Research has long been my passion,” he said, “and the National Laboratories have outstanding scientists and facilities. At LLNL, I’ll have the opportunity to work with instruments and techniques that are not available anywhere else.”

Baliu-Rodriguez will be working on a project to develop methods to determine the quantity of metabolic products and pathways in different mouse phenotypes after damage to articular cartilage, a connective tissue lining the surface of joints. When the cartilage severely wears down, it leads to osteoarthritis, which affects millions of people globally.

And, yes, it’s a dream job, one that came from another project that his group at UToledo in Dr. Dragan Isailovic’s lab was working on jointly with LLNL and the University of Michigan. The ongoing project is to investigate the influence of the microbiome on biotoxin production by the freshwater cyanobacterium Microcystis that proliferates in Lake Erie every summer.

“My part in the project was to quantify the toxin produced by cultured cells,” Baliu-Rodriguez said. “The project leader, Dr. Xavier Mayali of LLNL, made me aware of the postdoc opportunity and recommended me for the job. Dr. Dragan Isailovic, my advisor, is highly collaborative. I’ve also worked with scientists at UTMC and Wayne State University, which has opened a lot of doors for me.”

“I’m eager to advance my career as a scientist. As a graduate student, I often focus on the small details of a project, how to change the way I perform an experiment to improve results, or how to be most efficient with my resources. As I move higher up the ladder, instead I’ll be looking at the bigger picture.”

It was with the help of the UToledo Office of Research and Sponsored Programs that Baliu-Rodriguez and Isailovic had the opportunity to visit two National Laboratories.

“Our involvement in the project with LLNL was partially due to the results of a successful collaborative study with Prof. Bridgeman from Lake Erie Center, to which David contributed immensely, and an opportunity to present our research to the group of outstanding scientists from LLNL when they visited The University of Toledo,” Isailovic said.

“David is a productive researcher, an excellent communicator and a very collegial person. Therefore, I was not surprised that the scientists from LLNL were impressed by his scientific skills and was happy to hear that he landed a postdoctoral position there. Considering that he has successfully used and maintained state-of-the-art instrumentation at The University of Toledo, I believe that he will contribute much to the research performed in LLNL, further excel his scientific skills and positively represent our university in this prestigious institution.”

“The University of Toledo is a critical partner in our efforts to recruit the best and the brightest to join the ranks of our talented researchers at the Department of Energy’s national laboratories,” U.S. Congresswoman Marcy Kaptur said. “This collaborative spirit is responsible for generating significant resources to support federally funded research in our region, and provides unique, enriching experiences for University students as they step forward on the path to their new careers.”

Baliu-Rodriguez was born in born in Rio de Janeiro, where his mother is from, and immigrated to Toledo with his family when he was 4 years old. Baliu-Rodriguez graduated high school from St. John’s Jesuit, received his bachelor’s degree in chemistry from the University of Michigan, and began his graduate studies at UToledo in 2016.

“I chose UT in part because I was chosen as a Northern Ohio Alliance for Graduate Education and the Professoriate (NOA-AGEP) fellow,” he said. “NOA-AGEP supported me throughout my graduate education and helped me to develop the professional and personal skills that contributed to my success.”

The opportunity to work in Isailovic’s lab was a major selling point as well — and has made all the difference in his success as a student.

“Dr. Dragan Isailovic has been an excellent advisor who has pushed me into becoming an independent researcher,” Baliu-Rodriguez said. “He offered high-end instruments for me to learn and perform experiments, and projects that are worthwhile both from a career-development and environmental sense.”

Baliu-Rodriguez stressed that he never fit the mold of driven scientists, researchers and high-achievers in general as Type-A personalities. He is more of a Type-B personality — and it has made all the difference in his success.

“If I weren’t, I think I would have long ago been driven crazy by my many, many failed ideas. It’s not always difficult to come up with good, sound scientific ideas. But what works on paper and what works in the lab are often very different things. And, of course, the experiments that I want to do and the experiments that I have the time and resources to do are often incongruent. So I learned that it was important to not be discouraged by failed experiments, and to not have tunnel vision — explore the ideas that pop in your head as they come and don’t focus singularly on the endgame of a single project.”

With a burgeoning career that will take him 2,300-plus miles to a new home, Baliu-Rodriguez said he will miss Toledo, his longtime home, his family and UToledo.

But he’s also ready to begin writing the next chapter of his life.

“I look forward to expanding my horizons to California, where there is so much exciting science being done,” Baliu-Rodriguez said. “Dr. Dragan empowers his students to be independent thinkers, and to find new ways to apply what we’ve learned to our projects. At LLNL, I’ll be taking that skill to the next level.”