Dr. Nina I. McClelland, a renowned environmental scientist who championed safe drinking water around the globe and returned to teach and lead at The University of Toledo, died Aug. 16. The Toledo resident was 90.

“Dr. McClelland was an outstanding alumna of The University of Toledo and trailblazer for women in science,” Dr. John Plenefisch, interim dean of the College of Natural Sciences and Mathematics, said. “Her lifelong efforts setting high standards for water quality and the environment have truly made the world a better place.” 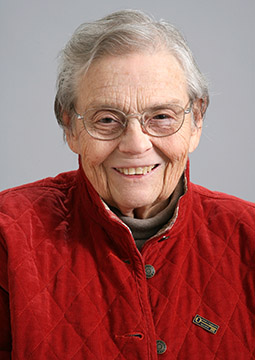 McClelland, who earned a bachelor’s degree in biology in 1951 and a master’s degree in chemistry in 1963 from UToledo, was recognized globally as one of the most influential people in environmental science. She served as chair, president and chief executive officer during her more than 30 years with NSF International, formally National Sanitation Foundation, an independent, not-for-profit organization dedicated to certifying products and writing standards for food, water and consumer goods.

As former chair of the American Chemical Society, the world’s largest scientific organization, McClelland developed a Water Quality Index to report water quality in lakes, rivers and streams. In time, states and water authorities were required to annually report water quality to Congress using the index. After the Safe Drinking Water Act was passed, she developed a standard adopted by the government regarding chemicals used to treat drinking water, as well as one covering all products that come in contact with drinking water via its treatment, storage and distribution.

When she retired in 1995 from NSF International, she formed a consulting firm whose clients included the World Bank.

McClelland was a principal and consultant with the International Clean Water program, dedicated to providing healthcare, safe drinking water and food, education, disease control, and other essentials to those in developing countries. She also served on the National Academy of Sciences Committee on Water Treatment Chemicals and for three terms on the Environmental Protection Agency’s National Drinking Water Advisory Council.

That passion began with her first job as a chemist and bacteriologist in the Department of Health at the Wastewater Reclamation Facility in the city of Toledo. After five years, she was named chief chemist, a position she held from 1956 to 1963. She became the first woman in Ohio to earn a Class A license for wastewater treatment.

After receiving a master of public health degree and a doctorate from the University of Michigan in 1964 and 1968, respectively, McClelland joined NSF International in Ann Arbor.

During her career, McClelland served on several major committees, including the National Institute of Standards and Technology in the U.S. Department of Commerce, the National Drinking Water Advisory Council in the U.S. Environmental Protection Agency, and the Committee on Water Treatment Chemicals in the National Academy of Sciences’ National Research Council.

In 2003, McClelland returned to the Glass City and her alma mater as an adjunct professor in the Department of Chemistry. Five years later, she was tapped to serve as dean of the College of Arts and Sciences. She retired from the University in 2011 after working in the Office of the Provost. The dean emerita and professor emerita also served as executive-in-residence in the College of Business and Innovation.

McClelland was awarded an honorary doctorate in science by the University in 2003, and in 2014 received the UToledo Alumni Association’s Gold T in recognition of her outstanding career accomplishments. In addition, she was the recipient of the Outstanding Alumna Award from the Department of Chemistry in 1993 and the College of Arts and Sciences in 2004, and the University Women’s Commission’s Alice H. Skeens Outstanding Woman Award in 2017. And she was featured in the 2004 book titled “Nine UT Alumni Who Changed the World.”

Her many honors include induction into the Ohio Women’s Hall of Fame in 2010 and the National Wildlife Federation’s 2016 Women in Conservation Award, which she received for protecting safe water around the world, promoting clean energy, and preserving wildlife and habitats in Ohio. She also was named a Fellow by the American Chemical Society in 2011 and was recognized as a Legend of Environmental Chemistry by the organization.

“Nina was a tremendous friend and supporter of the College of Natural Sciences and Mathematics and her beloved University of Toledo,” Plenefisch said. “She will be greatly missed, but her legacy will live on at the University through the students and the research being performed in the Dr. Nina McClelland Laboratory for Water Chemistry and Environmental Analysis in the Department of Chemistry and Biochemistry. She loved our students and was always encouraging them to seek their full potential.”

Tributes are suggested to the Dr. Nina McClelland Laboratory for Water Chemistry and Environmental Analysis through The University of Toledo Foundation; call 419.530.7730 or email utfoundation@utoledo.edu.