An astronomer at The University of Toledo is combining several techniques to take a high-precision look at how our Milky Way and other galaxies formed and changed after the Big Bang billions of years ago.

The National Science Foundation awarded Dr. Anne Medling, assistant professor in the Department of Physics and Astronomy, a three-year, $332,964 grant to study the way gas — the fundamental building blocks of stars — gets blown out of galaxies by strong winds. 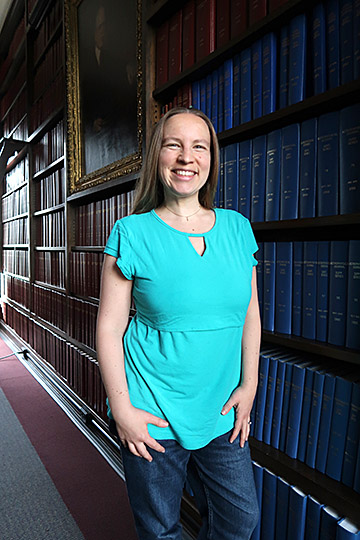 The scientist will use resolved spectroscopy — splitting the light from a galaxy into many different colors — to track the causes and effects of galactic winds, which are driven by black holes and star formation.

As part of the project, Medling’s team also will use their research to develop a public show for the UToledo Ritter Planetarium, titled “The Secret Lives of Galaxies,” which also will be available to other planetariums around the world in both English and Spanish.

“Extreme winds driven by bursts of star formation or active supermassive black holes can eject gas from a galaxy, but weaker galactic winds are more prevalent and their long-term impacts on galaxy evolution may be significant,” Medling said. “Our method allows us to detect those weaker winds.”

Medling will use the Sydney-Australian Astronomical Observatory Multi-Object Integral-Field Spectrograph Galaxy Survey data to identify gas outflows and quantify the effects of winds on their host galaxies using a 3D shock diagnostic that can trace gas outflows up to two orders of magnitude weaker than standard methods.

“By looking at so many galaxies at this level of detail, our team will study how galaxies move from youth — blue and star-forming — into their old age — red and no longer able to form new stars,” Medling said.