Fourth-year medical student Nealie Ngo has been fascinated by the intersection of art and medicine/public health since she created a graphic novel about female body image for her senior thesis at Yale. 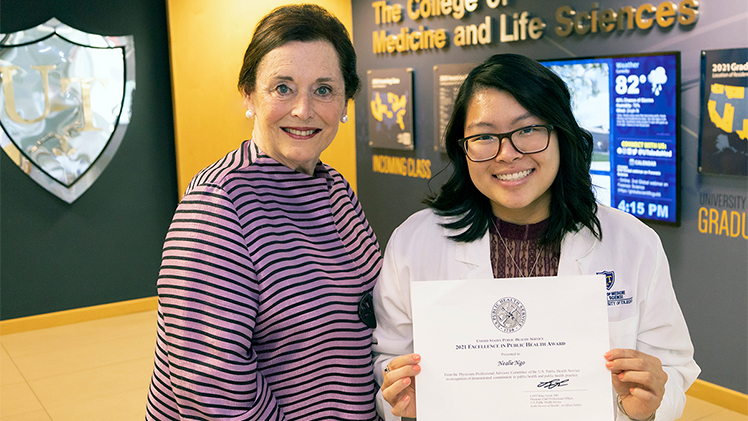 “I had the privilege to be her nominator for this prestigious honor,” said Woodson. “I have been familiar with Ngo’s accomplishments, and they are many.”

Ngo shared her excitement about receiving the public health award.

“I am incredibly humbled and honored to receive this award,” she said. “This accomplishment would not have been possible without the help, support and encouragement of Dr. Woodson, a role model I look up to in all things art and public health, and Dr. Hussain, Dr. Boose and Dr. Da-Silva, the first people at UTCOMLS who believed in me and my art.

“These inspiring mentors all helped me to realize my future career goals as both a physician and a public health leader. Within public health, I am specifically interested in health communications and graphic medicine (a field that uses comics, graphic novels and other forms of visual storytelling to share health experiences and/or health information).”

Ngo has earned several scholarly accomplishments during her time at the College of Medicine and Life Sciences. She presented her work at the Ohio Psychiatric Physicians Association Annual Psychiatric Update, and was awarded second place in the poster competition, as well as the British Society of Aesthetics Conference: Art, Aesthetics and the Medical and Health Humanities in Kent, United Kingdom (with the support of Dr. Hussain and the UToledo Alumni Fund).

She also had a pair of articles published in the American Medical Association (AMA) Journal of Ethics that featured her own comics and art; the AMA articles are available online here and here.

Her current projects include creating an educational comic-pamphlet about the inpatient behavioral unit for patients in the pediatric intensive care unit who are admitted because of a suicide attempt at ProMedica Toledo Hospital.

“Seeing the fear that many patients had when they were told their next step in care was inpatient psychiatric care, as well as the lack of resources made specifically for the pediatric population, inspired me to work with Dr. Da-Silva to create this intervention during my third-year pediatrics rotation,” Ngo said. “By giving patients a tailored resource early on in their hospitalization, I hope to decrease patients’ feelings of anxiety, fear and reluctance, as well as give them a sense of control and empowerment regarding their next steps in their road to recovery.”

Ngo is also a graphic artist and research consultant at Yale CHATogether, a group focused on Asian Americans and Pacific Islanders (AAPI) wellness that was formed during the COVID-19 pandemic, where she creates comics and graphic novels about AAPI mental health.

Ngo is headed to Columbia University’s Mailman School of Public Health in New York this fall to pursue a master of public health degree before returning to UToledo next fall to complete her final year of medical school.

“I plan to focus my degree on health communications and to explore more of graphic medicine to bring together art, medicine and public health,” she said. “I hope to specialize in psychiatry, where I have an interest in college mental health as well as child and adolescent psychiatry. I am excited to continue exploring how art and comics can serve my future patients as tools of education and even therapy throughout my future career.”