A central question of neuroscience is how does our brain form, store, and recall memories?

Before we can answer that question, we have to first ask: What is memory? The physical basis of memory is called an engram. An engram is a specific group of brain cells that fire together when we remember a certain detail about a past event. In other words, our brain records the details from the past event into a unique firing pattern that is shared by a specific group of brain cells called neurons. This was verified 10 years ago when Nobel laureate Susumu Tonegawa’s research group made a rat model remember an event that caused a fear reaction (fear recall) by activating an engram in the brain, showing that neuronal engram is the physical basis of memory.

This exciting discovery meant that now we know what the physical building blocks of memory are, but we still don’t know how these blocks are recorded and stored in our brain. Scientists have long been limited by the lack of methods to answer these questions; however recent advancements in technologies have spurred investigations into how memory is formed and stored. 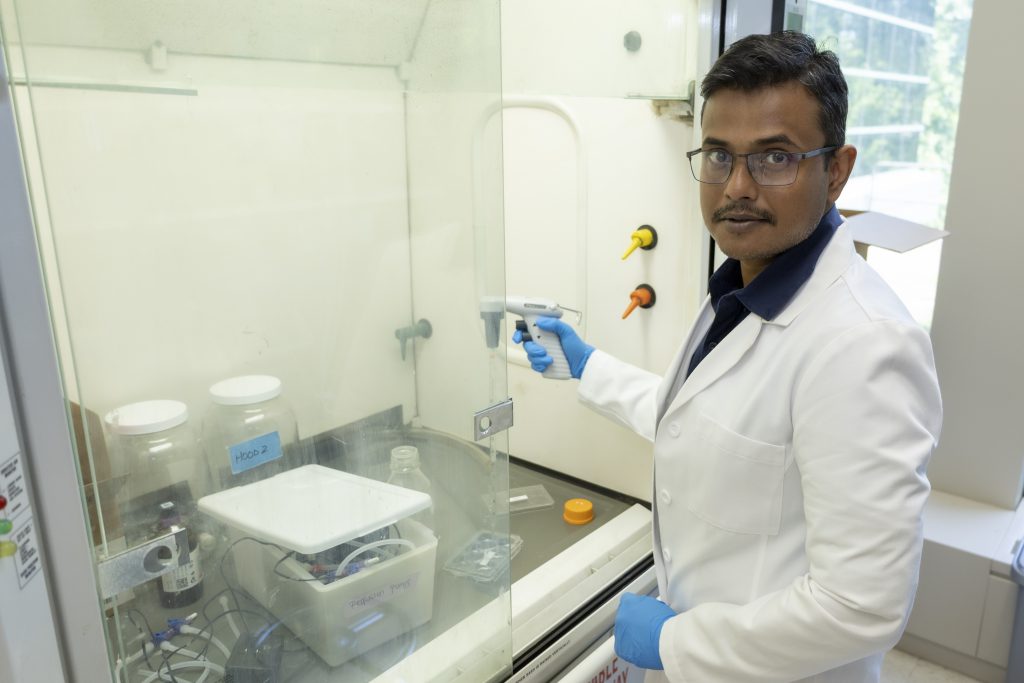 These recently discovered technologies have uncovered a mechanism within our brain that is extremely sophisticated and complex. Further understanding will require research groups around the world to work together during the coming years to fully understand this process. In fact, our research group here at the University of Toledo is now using these new methods to look inside the brain of animal models for answers.

Neurons talk to each other using electrical signals that are called action potentials. Our research uses a technology that allows us to record live images of the firing of action potentials by brain cells while also monitoring the mouse model’s behavior. Using this new technology, we can now identify specific brain cells that store memories of everything happening during the session.

For example, in one of our recent experiments, we identified a specific type of neuron that showed activity only when the test mouse approached a certain corner of a square arena. These types of neurons are called place cells, because firing activity in these neurons are linked with memory of a familiar place.

Better healthcare can now keep us physically healthy into old age, but our brains are still failing. Therefore, we want to use our knowledge of memory formation to further our understanding of chronic disorders of the brain, such as dementia, and find a way to stop these chronic disease processes.

For example, in the early stages of Alzheimer’s disease, the most common cause of dementia in the elderly, patients display mild symptoms such as a failure to recollect recent events, places, conversations, or names. This type of memory is called episodic memory.

Loss of episodic memory in Alzheimer’s disease is thought to be caused by accumulation of a toxic form of a protein in the brain called tau. Gradual disease progression is accompanied by the spread of the toxic tau in the brain, and more severe memory loss, ultimately leading to death. Not surprisingly, toxic tau proteins first start to build up in the same region of the brain that is used for the formation of new memories.

In one of our research projects, we are investigating how episodic memory is formed and how toxic tau corrupts this process during the early stages of Alzheimer’s disease, in order to develop better tools to stop disease progression. Since we can observe neuron activity in a mouse model moving around in an arena, we can test the impact of toxic tau on episodic memory and see what the neurons are doing in real time.

Our team will comprehensively examine how the brain cells work together to form memory and ultimately use this knowledge to improve memory function in Alzheimer’s disease or stop disease progression altogether. With these innovative novel new technologies, the future of Alzheimer’s disease research is bright; we just have to let the neurons light the way.

Dr. Priyo Goswamee is a research assistant professor in the Department of Neurosciences in The University of Toledo College of Medicine and Life Sciences Biomedical Science Program. Goswamee is conducting his research in collaboration with Dr. James Burkett, Dr. Robert Smith, and Dr. Jasenka Zubcevic.