Rockets Nearly Pull Off Upset at No. 7 Notre Dame

The Toledo Rockets nearly pulled off one of the biggest victories in their 105 years of football, but came up three points short, falling to No. 7 Notre Dame, 32-29, before 62,009 fans at Notre Dame Stadium in South Bend on Saturday.

The Rockets took a 29-24 lead with 1:35 left when redshirt freshman quarterback Dequan Finn bolted for a 26-yard touchdown on third-and-one. Notre Dame came right back and took the lead on an 18-yard TD pass from Jack Coan to Michael Mayer with 1:09 left. Kyren William caught the two-point conversion to put the Fighting Irish ahead, 32-29. 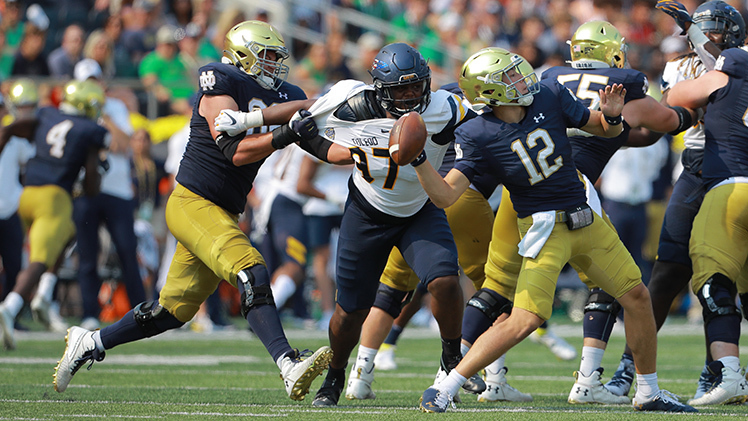 Toledo had one last chance but the game ended when a Carter Bradley fumble on a sack at the UT 29-yard line was recovered by Notre Dame.

Toledo’s defense held Notre Dame in check most of the game, racking up three turnovers, six sacks and five pass breakups. Junior cornerback Chris McDonald had a pick-six late in the first half and junior lineman Terrance Taylor had a pair of sacks.

Sophomore quarterback Carter Bradley completed 17-of-27 passes for 213 yards. His top target was sophomore Devin Maddox, who had a career-high nine receptions for 135 yards. Junior Bryant Koback paced the rushing attack with 122 yards and one TD on 22 carries.

“When you play a Top 10 team like Notre Dame, you try to throw punches, take punches and try to be there at the end and try to win,” said Head Coach Jason Candle. “I thought our team was able to accomplish that but just came up a little bit short. I’m really proud of our team, the fight in that locker room and our coaches sticking with a good plan throughout the entire 60 minutes. We have nothing to hang our heads about and we should come away from this with some confidence moving forward. I like the direction we’re going.

“It was back and forth right to the end and I think both teams thought they had it won once or twice. That’s the beauty of college football. That’s the pageantry we all have missed and what we love about our great game.”