About the last memory the 23-year-old UToledo nursing graduate has of the next few days is when she stepped into the crosswalk at the intersection of South Towerview Boulevard to cross over Dorr onto campus. 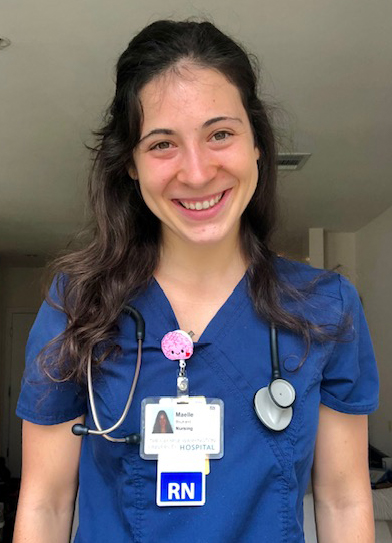 Boutrand was struck by a vehicle going an estimated 45 mph. The driver, who was distracted by his phone, failed to see that his green light had turned red and that Boutrand, who had the right of way, was crossing the street.

Within minutes of the accident, as her brain hemorrhaged, Boutrand slipped into a coma. A police officer, who witnessed the accident, cradled her until paramedics arrived.

Boutrand would remain comatose for three days, as her family rushed to the hospital from out of state and her doctors prepared them for the worst.

“They didn’t think I was going to make it,” she said.

She proved them wrong.

Approximately a month later, Boutrand took her fall semester finals. And in May, she graduated on schedule with her master’s in nursing — she had completed her bachelor’s in biology at UToledo in 2019.

Now almost fully recovered physically, Boutrand works as a registered nurse at the George Washington University Hospital in Washington, D.C., caring for patients who are dealing with trauma issues much like hers.

She also proved to herself that she possesses a deep well of resiliency — one that wouldn’t let her give up on graduating last spring as soon as she was conscious.

“When I woke up from the coma, I knew I needed to work on assignments and wondered how I was going to do in class,” Boutrand said.

While she was in the hospital, her UToledo mentors and professors did their part to help her in her recovery.

Dr. Linda Lewandowski, vice provost for health affairs for interprofessional and community partnerships, dean of the College of Nursing, and interim executive director of University Health Services, reached out to Boutrand’s mother, for example, to offer her support while she was still in a coma.

And Dr. Kelly Phillips, department chair of Adult, Family and Population Health and Maternal, Pediatric and Mental Health and director of the Graduate-Entry MSN Program, worked with Boutrand to keep her on track in her coursework.

“From day one in her nursing program, Maelle shared that she loved people, which she demonstrated consistently throughout the program,” Phillips said. “She has a kind spirit and exhibits compassion through her work with patients. 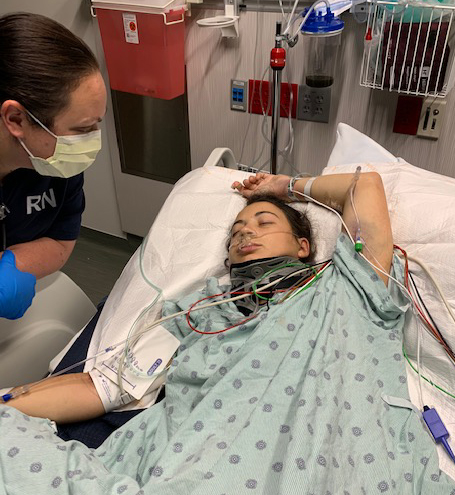 Maelle Boutrand was in a coma for three days in late October after being struck by a car. She took her fall finals about a month later.

“When this tragedy occurred, I learned that she was very quickly asking about her studies and clinical experience and how she might get back to her schoolwork so that she could graduate on time. That of course was a goal for me as program director, but she also needed to heal.  She accomplished everything beautifully and was able to graduate on time with her colleagues.”

Boutrand said that compassion was significant in her successful recovery.

“They were there for me,” she said. “For them, it wasn’t about me being a good student, it was about me taking my time to get back my health. ‘That comes first,’ they said. ‘And then we’ll welcome you back.’ ”

“I’ll never forget them,” Boutrand added. “We don’t forget the people who have truly made a mark on our lives.”

After Boutrand received medical permission to return to her school activity, she worked from her parent’s home in North Carolina to get caught up in her coursework and take fall finals. She returned to campus for spring semester to finish the necessary 300 hours of floor time learning how to care for patients from a supervising preceptor at a local hospital.

“I wanted to get back on track,” she said. “I wanted to be back in Toledo to do those hours in person. I stayed with different family and friends from week to week. But I pushed through and got those 300 hours on the floor. And then I went back to finish the rest of my classes from home in North Carolina with my parents.”

As the year anniversary of the accident approaches, Boutrand has discovered in the months since that fateful Oct. 20 morning that she is not that same person.

And while she does not want to be defined by what happened — rather what happens next — she does hope that her experience will serve as an inspiration to patients going through similar traumas as well as others facing huge obstacles.

“You don’t need to be hit by a car to go through challenges in your life,” Boutrand said. “Right now, you might be struggling, and you may not believe that you can get through it, but you can set your mind to do great things if you only will believe in yourself.”